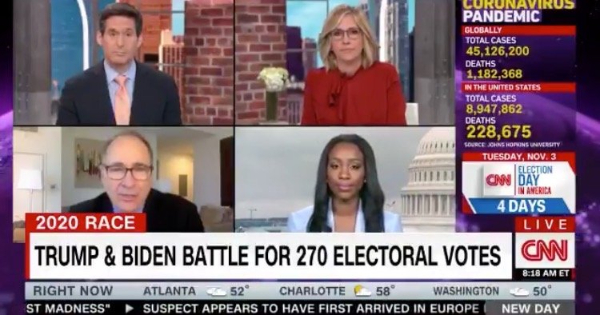 Democrats are worried about the strong Republican turnout in early voting in the key battleground state of Florida, particularly in Miami-Dade County, CNN's Alisyn Camerota said Friday in a panel discussion.

The county likely will remain a Democratic stronghold, but the party must perform well there to offset Trump support in the rest of the state.

She cited Democratic Rep. Frederica Wilson, who represents Florida's 24th congressional district telling Politico of her efforts to sound the alarm to the Biden campaign.

"I screamed. Hollered. I called. I lobbied from the top to the bottom," Wilson told Politico.

Wilson said the Biden campaign hasn't been doing door-to-door canvassing because of the pandemic and hasn't invested money in the people on the ground who know how to turn out the vote.

Joshua Geise, Florida director for America Votes, an independent organization coordinating with 50 groups on the ground to turn out voters for Biden, also issued a warning.

"We've got to stop the bleeding," Geise told Politico.

On the CNN panel, former Barack Obama chief strategist David Axelrod said Miami-Dade is the place where Biden "has to mount a huge advantage going into Election Day."

"The other thing you notice, if you look deeply into these numbers, is that where the falloff is appears to be among African-American voters," he said.

"And that is a concern."

See the exchange on CNN: