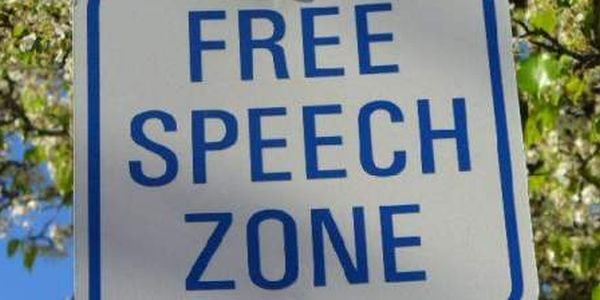 Syracuse University has much to be proud of, but not when it comes to support of free speech on campus—SU ranks among the weakest schools in this area, according to the 2020 College Free Speech Rankings released last week by RealClearEducation in partnership with The Foundation for Individual Rights in Education (FIRE) and the research firm College Pulse. Syracuse ranked fifth from last of the 55 universities surveyed.

The school scored only a 39 out of 100 in the survey’s “self-expression” category, meaning that only 39 of 100 student respondents said that they felt comfortable sharing their viewpoints. A majority of those Syracuse students—61 out of 100—said that they do NOT feel able to share their opinions.

The problem seems to come from the top: the university’s administration earns low marks from students in its support of free speech. The school scored just a 53 out of 100, a far cry from top-ranked University of Chicago, where more than 90 out of 100 students say that their administration supports free speech.

Earlier this year, Syracuse’s dean of the College of Arts and Sciences Karin Ruhlandt and Interim Vice Chancellor and Provost John Liu placed Distinguished Professor Jon Zubieta on leave after the chemistry professor included the terms“Wuhan Flu” and “Chinese Communist Party Virus” on his course syllabus. The administrators claimed that labeling the disease this way was racist. Some students objected publicly to the move, and some large university donors expressed their displeasure privately. FIRE has called on SU to reinstate Zubieta.

“It demonstrates the administration’s oversensitivity and willingness to fold under pressure from the speech police,” wrote student Cesar Gray in a column in The Daily Orange, Syracuse’s student newspaper. “It’s hateful now to attribute to an illness the name of the geological region where it originated?”

Paul McPolin, a 1987 graduate of Syracuse and now deputy editor at the New York Post, had more positive memories of how the university handled free speech back when he was a student there. He recalled how during his time at The Daily Orange, he did “a series of investigative stories exposing how the administration was secretly planning to revise University Senate and governance rules, which would have limited student input. My stories, which were very unflattering to the SU administration, helped kill the effort. However, rather than try to shut me down, the administration fully cooperated with me and answered all my queries. To me, that showed the school respected the First Amendment, a free press, and the students’ right to speak up—even when it disagreed with what we said.”

Unfortunately, the free speech environment at Syracuse has been deteriorating for years.

In 2016, Shimon Dotan, an Israeli filmmaker and NYU journalism professor, was disinvited to Syracuse after SU Professor Gail Hamner wrote a letter saying that she had been pressured to rescind his invitation because of the filmmaker’s work on Israeli settlements in the West Bank.

Dotan never visited the university, though he was eventually reinvited, according to Matthew Cleary, a member of the University Senate’s committee on Academic Freedom, Tenure and Professional Ethics.

FIRE criticized SU in February for initially refusing to recognize a university chapter of Young Americans for Freedom, a conservative student group. SU cited YAF’s lack of a faculty adviser and the group’s requirement for prospective members to acknowledge the “superiority” of the U.S. Constitution. YAF did eventually receive official recognition from the university.

Maintaining freedom of speech at Syracuse could depend crucially on The Daily Orange, McPolin believes, because the student paper is not a university-funded organization. A free and independent press, at Syracuse as anywhere else, is what protects free speech.

This article is part of a series of investigative reports by RealClearEducation: Inside the 2020 College Free Speech Rankings.

WND News Services
These reports are produced by another news agency, and the editors of WND believe you'll find it of interest.
Choice is the catch-all solution to public education's endless problems
Ivy-league university to disband online misinformation project after director ousted
Schools to host Black Lives Matter at School Week
Yes, 'Zombie Studies' is a thing
'Left Behind: Rise of the Antichrist' exceeds $3 million on opening weekend
See more...

Yes, 'Zombie Studies' is a thing