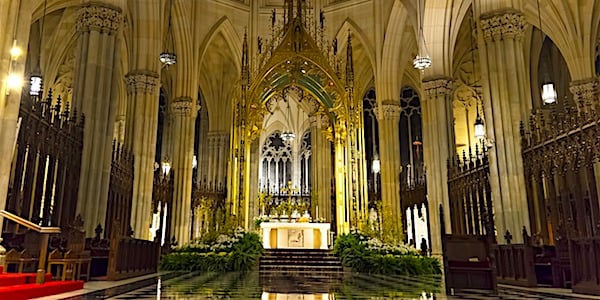 If the road to the White House runs through the Catholic vote, both President Trump and former Vice President Joe Biden face significant challenges.

Trump’s challenges are more obvious, while Biden’s lurk just beneath the surface.

According to the newly released EWTN-News/RealClear Opinion Research poll of more than 1,400 Catholic likely voters, the president is currently running 12 percentage points behind Biden nationally.

In addition, a majority of Catholic voters say that they prefer the Democratic nominee’s temperament to the president’s (59%-33%), and most also say they prefer his policies to Trump’s (53%-41%).

Our previous poll in September also found that on most issues Catholics say they trust Biden more than Trump.

So Trump’s challenges are in plain sight. For Biden, the devil is in the details.

Among Catholics overall, the race between the two shrinks to within the survey’s margin of error in the key swing states of Arizona, Florida, Michigan, North Carolina, Pennsylvania, and Wisconsin. In those states Biden’s lead is just four points (48%-44%).

And while Catholic voters say they prefer the challenger’s policies, more than three in four (78%) say they are much (46%) or somewhat (32%) more likely to pull the lever for a candidate who “supports the religious freedom of people of faith.”

But questions about Biden’s commitment to religious freedom loom large for many people of faith. Given his ticket’s embrace of policies that promise a return to the battles over religious freedom seen in the Obama administration, many Catholics could find Biden’s positions in this area problematic.

Abortion, too, provides a challenge for him. The most Googled political topic on Election Day 2016, that issue has been overshadowed this year by COVID-19, along with the related issues of the economy and health care.

But as recent elections, and the Supreme Court confirmation hearings, show, abortion is an issue that can quickly surface – and often does.

It should be of concern to the Biden campaign that by almost 20 percentage points a majority of Catholics surveyed said abortion was “morally wrong” (59%-41%). The divide was even greater among practicing Catholics who attend Mass at least weekly (71%-39%).

Catholics who have an opinion on the subject are also more likely – by double digits – to believe that a Catholic politician should follow church teaching on abortion (43%-29%). Among practicing Catholics, that gap expands considerably (61%-17%).

These numbers represent a particular problem for Biden, who has sought to embrace a Catholic identity while simultaneously distancing himself from the church’s teaching on abortion.

Biden supports both taxpayer funding of abortion and would allow abortion at any time during pregnancy. He also has proposed codifying into law the Supreme Court’s still hotly contested abortion decision, Roe v. Wade.

Biden’s opposition to Amy Coney Barrett’s confirmation as a Supreme Court justice also runs counter to the plurality of Catholic opinion. Catholics with an opinion on the nomination support it by almost 20 percentage points (46%-28%). And unlike Biden, more Catholics think that a president should put forward a nominee to the high court any time during his entire four-year term than believe that a nomination should be delayed until after the election (48%-43%).

At the same time, it seems clear that both obvious and less obvious challenges face both candidates as they make their final case to the Catholic electorate.

And Catholic concerns will continue to be in play for the next four years, whoever wins the election.