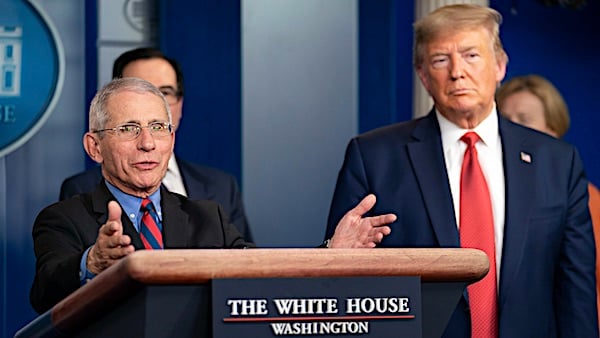 Dr. Anthony S. Fauci, director of the National Institute of Allergy and Infectious Diseases, and a member of the White House Coronavirus Task Force, responds to a reporter's question at a coronavirus (COVID-19) update briefing Wednesday, March 25, 2020, in the James S. Brady Press Briefing Room of the White House. (Official White House photo by Tia Dufour)

"People are saying whatever. Just leave us alone. They're tired of it. People are tired of hearing Fauci and all these idiots," Trump said, according to Politico.

The president later called Fauci "a nice guy" but said "he's been here for 500 years."

The president's remarks came after Fauci said in a "60 Minutes" interview that aired Sunday night that he was "absolutely not surprised" that Trump was diagnosed earlier this month with COVID-19 after a "super-spreader" event at the White House.

The president called Fauci a "disaster," who is a "bomb" in TV interviews but a "bigger bomb if you fire him."

"If there's a reporter on, you can have it just the way I said it. I couldn't care less," the president said.

Trump then went to Twitter to continue his criticism of Fauci, who has served as the director of the National Institute of Allergy and Infectious Diseases since 1984.

"Dr.Tony Fauci says we don’t allow him to do television, and yet I saw him last night on @60Minutes, and he seems to get more airtime than anybody since the late, great, Bob Hope. All I ask of Tony is that he make better decisions. He said 'no masks & let China in.' Also, Bad arm!" Trump wrote, with the latter remark referring to Fauci's errant first pitch at a Washington National's game.

Fauci told "60 Minutes" that when he saw people not wearing masks and social distancing at the White House event introducing the nomination of Judge Amy Coney Barrett, he said "oh my goodness."

"Nothing good can come out of that," Fauci said. "That's got to be a problem — and then sure enough it turned out to be a super spreader event."

In an interview last Wednesday with CBS News, Fauci advised American families to consider canceling their Thanksgiving gatherings this year.

He said his children won't be visiting him.

"Thanksgiving is going to look very different this year," he said. "I would love to have it with my children, but my children are in three separate states throughout the country and, in order for them to get here, they would all have to go to an airport and get on a plane. All three of them want very much to come home for Thanksgiving."

He said people "should be very careful and prudent about social gatherings."

"You may have to bite the bullet, and sacrifice social gatherings unless you’re pretty certain that the people you’re dealing with are not infected, or have very recently tested, or they’re living a lifestyle in which they don’t have any interaction with anybody except you and your family," he said.