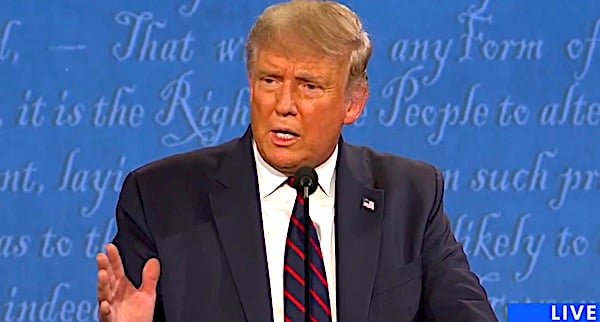 “But you can tell the story of why this year might genuinely be different as well! In particular, you can see how there may be many Republican-leaning voters who genuinely like his [Trump’s] policies but dislike him personally on such a visceral level that they cannot bring themselves to vote for him.” – Sean Trende, RealClearPolitics senior elections analyst, Oct. 20, “What a Big Biden Win Would Look Like.”

What Trende wrote is true, but also there is an opposite reaction — Republicans who admit that they personally despise the president but are voting for him anyway because they like his policies.

Such contradictions in voter behavior diminish the chances of predicting the presidential winner once afforded by a light-hearted, hypothetical question asking voters: “Who would you rather have a beer with?”

(Note: After searching during this election cycle, I have yet to find that question asked by any polling company.)

When this theoretical, quadrennial beer question entered the political domain (around 2004, based on my research), pollsters concocted that pop-culture scenario to gauge “likability” as a factor in predicting outcome. To be clear, that poll served as a metaphor only, as two recent commanders-in-chief – and at least one candidate for the job – did not drink.

After all, beer sharing aside, Americans are not only voting for a president but someone who they will invite into their homes over the next four years.

However, it just so happened that the “have a beer” question was a decent predictor of who would win the White House.

For example, in 2004, a poll found that 57.3% of undecided voters preferred President George W. Bush as a drinking buddy over Sen. John Kerry. Voters picked Bush even though he abstained from drinking, while Kerry — his “elite” Democratic challenger — was perceived as more “snobby.”

During the 2008 election pitting Sens. Barack Obama and John McCain, I read a revealing modern twist on the beer bro’ question from a young male's perspective. He said that McCain would be “more fun one-on-one in a bar crawl.” But, Obama “would get me into better clubs” and “make sure the ladies paid equal attention to me.” Now that is some focus-group insight! A window into why Obama’s perceived magnetic personality and nice-guy image was key to his decisive 2008 win over McCain, who was considered more hot-tempered.

In 2012 when President Obama was up for reelection, he again won the brew challenge with favorability numbers that surpassed his weaker job approval rating while running against Republican Mitt Romney. (As a member of the Mormon faith, Romney did not drink.)

That data from a June 2012 report on Mediaite also quoted an MSNBC guest describing Romney as a “geeky, awkward candidate on the campaign trail” who “doesn’t project a lot of personal warmth. He doesn’t seem the kind of guy you’d want to sit down and have a beer with.” Likeability was a significant factor in 2012, and the more popular Obama was overwhelmingly reelected.

Then in June 2016, Rasmussen reported polling results for the presidential candidate with whom “likely voters” would prefer to have a beer. Donald Trump won 45% to Hillary Clinton’s 37%, with 18% undecided.

Yet, Trump and Clinton were nearly tied at 42% to 41% when likely voters were asked which candidate “they’d prefer to invite home to dinner with them and their families.” Again, a large percentage, 17%, were unsure. Those mid-year polling results predicted the tough, unsettled race that lay ahead.

Four years later, we are less than two weeks from what everyone calls “the most important election of our lifetime.” (In a December 2019 RCP piece, I argued that voters think that way about every presidential election.)

Now let’s revisit the all-important beer-buddy question from a new perspective. Sean Trende’s analysis about Republicans who like Trump’s policies but won’t vote for him due to his unlikeable personality is supported by Politico’s Tom Alberta, who wrote:

“Generations of pollsters and journalists have fixated on the question of which candidate voters would rather have a beer with—a window into how personality translates into political success. Here’s the thing: Americans have been having a beer with Trump for the past four years—every morning, every afternoon, every evening. He has made himself more accessible than any president in history, using the White House as a performance stage and Twitter as a real-time diary for all to read. Like the drunk at the bar, he won’t shut up.”

Nonetheless, for the vast majority of Republicans, Trump is their favorite “drunk” who “won’t shut up,” and they don’t want him to. Millions of loyal, banner-waving, rally attending, MAGA hat wearers enthusiastically love and support the president because of what he has done, will continue to do, and are gladly voting to keep him in office.

Even Republicans who find Trump personally abhorrent will hold their nose and cast their vote with the other hand. I know this firsthand because these voters are my friends.

Last week while making a point in my controversial Trump piece, I included a text received the prior week from a dear friend who is a Republican leader explaining why I had to support Trump. It read in part:

“Pay attention to ISSUES, not personalities.”

In so many words, that is the mantra I hear repeatedly, and often this way: “Your house is on fire; do you care if the fireman is a jerk?”

Furthermore, reacting to my piece last week, RCP readers sent me numerous Gmails. These mostly angry messages exposed the schism facing our nation when millions of voters would relish that proverbial “beer” with Trump because of what he is doing for America. An example:

“Trump is one of the few people standing between mainstream American and the precipice.”

Also, I heard from Republicans who want to kick Trump out of that proverbial bar, such as this RCP reader:

“I have never seen the virtue of a group of people so much undermined by one person than the typical Republican has been by Trump.” The reader ended his long message writing, “Thank you and God Bless You for writing your article and making me feel less alone. I now have some hope.”

Finally, before I go drink a beer, here is an RCP reader’s message that best represents the view of most Trump-voting Republicans:

“Yes, President Trump's tweets are boisterous in nature and hurt him. Yes, he certainly has flaws. At least I know he will fight for my rights and has demonstrated a willingness to do so. That’s why I’m voting for him…I can overlook everything else.”