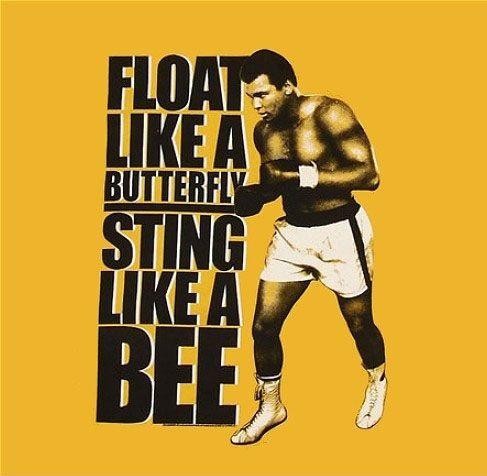 The first presidential debate, on Tuesday, was also the first bit of fun we've had in a while.

True, President Donald J. Trump failed to float his theory about that "big fat shot in the ass" Joe Biden likely got from his handlers, to allow the Democratic candidate to nimbly prance onto the debate stage and, "for two hours," be "better than ever before." But, like Muhammad Ali, the heavyweight boxing legend, POTUS floated like a butterfly and stung like a bee. A masculine force at full tilt, Mr. Trump provided plenty energy and entertainment as he blattered Joe Biden, while being funny in the process.

"If you didn't enjoy that debate, you are a soy-boy, beta cuck," a fun-loving fella tweeted out. Soy-boy Shapiro was having none of the fun stuff. Glum and sanctimonious, Ben tweeted out: "I literally have no idea who won this debate. I just know we all lost."

The self-styled philosopher-king's funereal pronouncement received the benefit of a Michelle Malkin reenactment. Don't miss that hilarity, 3:40 minutes into her post-debate podcast.

In letting out a collective primal groan that was music to MAGA ears, Ben-Shap was joined by every liberal and Never Trumpster on the left-wing game reserve.

Dana Bash of CNN lamented a "s–tshow," in which "the American people lost." "The debate was a disaster for democracy," her shell-shocked colleagues yelped. (Well, good, because the founders of this republic didn't think much of democracy.)

Certainly, judging by the rabid frothing and foaming on CNN, Trump did indeed win Tuesday's debate. Anderson Cooper whinged to Republican commentator Rick Santorum: "It's not even funny. Are you proud of the president? Santorum could not conceal a grin: "He came out HOT."

A man infatuated with his own cleverness, Jake Tapper bewailed "the worst debate in history, a hot mess, inside a dumpster fire, inside a train wreck." (Who wrote that "hot mess"?) Tapper forgot an interesting tidbit: Such fires are typically lit by the "idea" called Antifa.

After that came Jake's scoop about a "friend's 6th grade daughter who burst into tears, and had to run to bed," because "so appalled" was she by Trump's debate. "Appalled" is something parents of a 6th grader would inculcate. Kids perform on cue. It worked. Here come the waterworks: CNN's Dana Bash is crying.

These were all early indicators of a wildly successful evening for the president.

Best of all, Trump refused to call Gavin McInnes and his Proud Boys "white supremacists." Roared POTUS: "Proud Boys, stand back and standby. This is not a right-wing problem; it's the left. Somebody has to do something about Antifa."

How do you know that this was stunningly good? The president's impassioned statement was framed by the mad hatter media as "the most dangerous thing ever said in modern presidential history," clearly the most measured statement ever made in the annals of the media Idiocracy.

As anti-Antifa street brawlers, the Proud Boys represent a righteous response to the menace posed to ordinary, innocent, law-abiding Americans, who're being assaulted as they dine out, their suburbs invaded, their homes surrounded, loved ones besieged, targeted for being white, or for being bourgeoise, their businesses looted, burned or locked down.

By Ann Coulter's telling, the Proud Boys have protected the conservative commentator all over the country. They are, moreover, affiliated with the good people of Patriot Prayer, whose member was executed by an "idea" called Michael Reinoehl. Don't rest in peace, Aaron "Jay" Danielson; rage, rage from the grave. To defend against this aggression – mere "ideas," says Biden – makes you good. Proud Boys are racists only to the extent that fighting back is racist by default.

In the age of unconstitutional government, I contended in "The Trump Revolution," the best liberty lovers can look to is "action and counteraction, force and counterforce in the service of liberty. Until such time when the individual is king again, and a decentralized constitution that guarantees regional and individual autonomy has been restored – the process of creative destruction begun by Mr. Trump is likely the best Americans can hope for."

Even in debate, the best one can hope for in a country riven by irreconcilable conflict and driven to distraction by Trump Derangement Syndrome is to win by brute, argumentative force, by reducing opponents to tears and, in the process, bringing much-needed merriment to the much-maligned Deplorables.

"Creative destruction" was what President Trump delivered in spades in Tuesday's debate. To the first presidential debate ring, POTUS brought his Muhammad Ali footwork and power jabs. In Biden's defense, one must concede that the poor thing was not on the ropes. Biden held on for all he was worth. Since the loser was still standing, what we got was a technical knockout.

Civilized debate has been ruled out by the D.C. smart set which considers the Trump agenda, endorsed by 60 million Americans in 2016, subversive and treasonous.

This Trump Derangement Syndrome is like the inflammatory cytokine storm generated by SARS-CoV-2. The one ravages the body's internal organs; the other poisons the body politic. America got the debate the country's inflamed lymphatic systems can support.