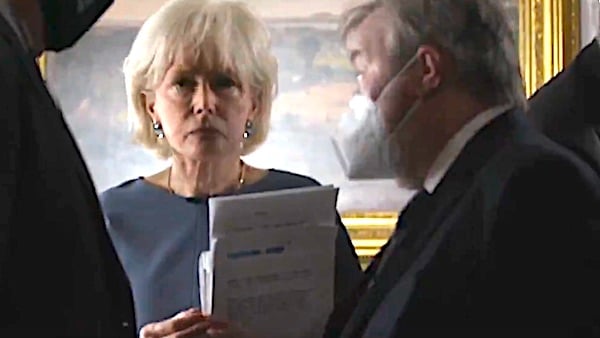 One of the show's personalities stated: "A lot of people on either side are saying that there's nothing funny about Trump being hospitalized with coronavirus. … And those people are obviously wrong. There's a lot funny about this."

Trump recovered quickly and within days was back handling both Oval Office and campaign chores.

But the president on Tuesday revealed on Twitter a White House visitor who wasn't wearing a mask: Lesley Stahl of "60 Minutes."

Lesley Stahl of 60 Minutes not wearing a mask in the White House after her interview with me. Much more to come. pic.twitter.com/0plZG6a4fH

CNN reported: "President Donald Trump abruptly ended a solo interview with CBS News' '60 Minutes' Tuesday and did not return for an appearance he was supposed to tape with Vice President Mike Pence, according to multiple sources familiar with what happened.

"After camera crews set up at the White House on Monday, Trump sat down with host Lesley Stahl for about 45 minutes on Tuesday before he abruptly ended the interview and told the network he believed they had enough material to use, according to two sources."

President Trump's White House has had strict rules about staff and visitors using masks in light of the COVID-19 pandemic. And the president sometimes has used one despite the fact he's not often actually mingling with crowds. There also are requirements for testing.

Democrats have claimed the president personally is responsible for the more than 200,000 deaths attributed to the Chinese virus.

Trump has argued he took immediate action to close down travel from China, even as Biden called his action xenophobic.

Trump tweeted Tuesday: "Lesley Stahl of 60 Minutes not wearing a mask in the White House after her interview with me. Much more to come."

The president's antagonists had a field day when he was diagnosed, with actor Dominic West saying he jumped for joy. It took House Speaker Nancy Pelosi less then 30 seconds to turn his health into a political issue and the New York Times speculated about whether he should remain on the ballot.