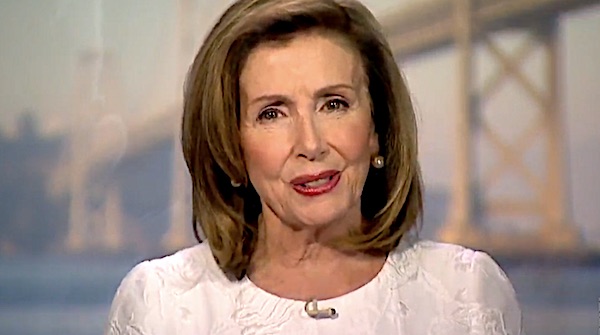 House Speaker Nancy Pelosi, who is becoming more isolated in her resistance to making a deal for another coronavirus relief bill, went off the rails in an interview Tuesday evening with CNN's Wolf Blitzer.

Blitzer pointed out that Democrats, including former presidential candidate Andrew Yang and California Rep. Ro Khanna, have been asking her to make a deal with the president.

"I don't know why you're always an apologist — and many of your colleagues, apologists for the Republican position," Pelosi said.

At issue is more money for unemployment assistance, proposed $1,200 direct payments to taxpayers and more forgiveable loans to small businesses. The White House has proposed spending some $1.8 trillion, which is on top of the trillions spent earlier this year.

Pelosi previously demanded about $3.7 trillion, and since then has come down to about $2.2 trillion. But she has refused to budge from Democrat demand, including bailing out states and cities largely run by Democrats.

Blitzer, a veteran interviewer, remained calm, asking follow-up questions when he could wedge them in.

Pelosi complained that the Republican deal doesn't have the child tax credits and earned income credits she insists are necessary.

Pelosi also accused the president of wanting "to put a check with his name on it in the mail."

Blitzer noted "millions of Americans who have lost their jobs. They can't pay the rent. Kids need the food."

Pelosi interrupted: "That's what we're trying to get done."

Blitzer asked, "Why not work out a deal with [President Trump] and don't let the perfect as they say here in Washington, be the enemy of the good?"

Pelosi retorted, "Well I will not let the wrong be the enemy of the right."

She then renewed her attack on Blitzer.

"You really don't know what you're talking about."

DailyMail.com said the "on-air spat continued until the dying seconds as both Pelosi and Blitzer attempted to have the last word and the speaker accusing the TV host of 'defending the administration all this time.'"

She ended the interview repeating at least four times and speaking over Blitzer, "We represent them."

Khanna previously stated: "People in need can't wait until February. 1.8 trillion is significant & more than twice Obama stimulus. It will allow Biden to start with infrastructure. Obama won in 08 by doing the right thing on TARP instead of what was expedient. Make a deal & put the ball in McConnell court."

Pelosi had told fellow Democrats that the White House proposal gave the president "too much power in deciding how the funds would be spent," the report said.

DailyMail.com noted the interview came a month after Pelosi was caught in a hair salon flouting coronavirus restrictions. She claimed she was "set up" and demanded an apology from the salon.