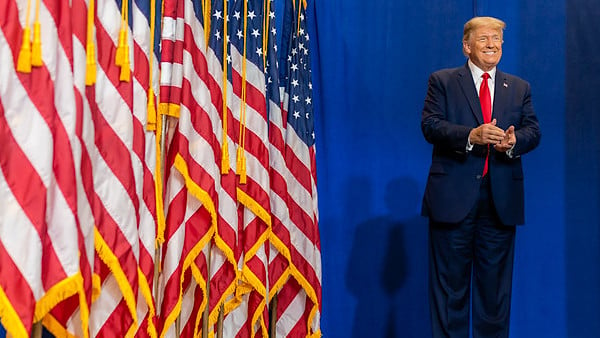 Alexandra Lains, a Turning Point USA ambassador, released a video recently in which she takes only 55 seconds to define the 2020 presidential election.

She warns the "woke" crowd that President Trump has the support of many Americans "because of you."

"If you’re a liberal and can’t stand Trump and can’t possibly fathom why anyone would want to vote for him, let me fill you in. We can’t stand you! You’ve done everything in your power to try and destroy this country by tearing down our police, our borders, our history — systematically destroying our schools and brainwashing our kids into thinking that socialism is the answer to everything," Lains said.

"Demonizing religion and faith. And glorifying abortion, violence, and thug culture. From calling us racists to expecting everyone of every color to follow our laws, to ridiculing us for having the audacity to wish someone a Merry Christmas, or have a flag on the Fourth of July or stand for our national anthem or — oh, the horror! — wear a MAGA hat out in public.

"So much for your tolerance. We are voting for Trump not because he’s the most charming character on the block, but because we vote policy over personality. And we are sick and tired of your divisive and destructive and ignorant and intolerant behavior and beliefs, parading around as some kind of wokeness," she said.

"We are voting for Trump because of you."

Talk-radio host Rush Limbaugh said the brief address "sums up why the left is so despised, why everybody has a problem with them."

"We’re supposed to ignore all that. You’re not supposed to vote for that, because this guy has a rotten personality. The truth is they’re the ones burning down America. They’re the ones looting property that isn’t theirs. They are the ones that are destroying — purposefully — the elements of greatness in this country."

He said the president's opponents "are systematically going about trying to destroy the Constitution, the concepts of liberty and freedom that have provided the foundation for this country … At the end of the day, it is their personalities that repulse us and a lot of other people. It’s their personalities that we are voting against, not just their destructive policies."

On Twitter, Steven Nemeth said: "Literally everything she said is why I'm voting straight Red Ticket, something I've never done in my life. And honestly … I can't see ever voting for a Democrat for anything ever again, they are too far gone."

Another Twitter user wrote, "This sharp lady just expressed the feelings of about a hundred million Americans better than any politian (sic) has in any commercial to date."

Martin Wilson said: "That is the most succinct and accurate summation of the current state of affairs I've heard to date … and all under 60 seconds. All it needs is Trump saying 'I approve of this message' at the end and it would the most powerful ad on the air."