At about 2:30 a.m. Wednesday morning, with officials in Pennsylvania, Michigan and Wisconsin determining no winner would be announced on Election Night, President Trump told supporters at the White House that Democrats were trying to steal the election.

Trump said at the White House his lead in Pennsylvania was 690,000 votes, with 64% of the vote recorded and pro-Trump counties still to be counted.

Trump claims election victory, but with millions of uncounted votes it is too early to credibly make that claim#Election2020 https://t.co/fVQ13KG8wT pic.twitter.com/144C0V4VTz

Trump has won the key battlegrounds of Florida and Ohio. He currently has 213 electoral votes, but likely will win Alaska, with three electoral votes, and one of Maine's four split votes, giving him 217.

If he picks up the additional four votes and maintains his leads in Georgia (16), North Carolina (15) and Pennsylvania (20), he could reach the 270 needed for victory without Wisconsin and Michigan.

Trump would then need to win Nevada's six votes or Arizona's 11.

In Nevada, with 67% counted, Biden leads by 0.6%. Fox News called Arizona for Biden, but the Trump campaign, which the network reported was "livid" about the decision, insisting the state is still in play.

In a conference call with reporters at about 10 a.m. Wednesday morning, the Trump campaign tamped down the president's declaration that he has won but expressed confidence he is on a path to victory, with millions of votes yet to be counted.

Officials said they were confident Trump would win Arizona, Pennsylvania, Michigan, Nevada and Georgia and were preparing for legal action.

In his White House remarks, Trump, without mentioning the network, criticized Fox News' decision to call Arizona for Biden, saying his campaign still has "a lot of life there." With 84% of the vote counted in Arizona, Biden leads 51% to 47.6%.

Pollster Rich Baris, who predicted a close election that would be decided in the Rust Belt, said Wednesday morning that the calling of Arizona for Biden by Fox News and AP when Trump was quickly closing the gap in the state stopped the president's momentum nationally.

When Fox News called Arizona, he noted, the vote count stopped in Maricopa County as well as in Michigan, Wisconsin, Pennsylvania, Georgia and North Carolina.

The Trump campaign said Wednesday their numbers indicate the president will prevail in Arizona by 30,000 votes, arguing they accurately predicted a close race in Wisconsin while predicted a Biden blowout.

Baris, in a tweet, said his numbers show Trump winning Arizona by 10,000 votes.

Veteran pollster Matt Towery of InsiderAdvantage said he was "amazed" Georgia was not called Tuesday night.

"There are not enough votes available to bring this race much closer or to create a contested situation," he said. "There was no Democratic wave in Georgia, despite what most pollsters and the national media had trumpeted.”

Towery, who has accurately polled the winner of every state race so far, said the "national networks are making fools of themselves by continuing to argue that Georgia is undecided."

"By doing so, they create confusion and mistrust for their efforts. It is time to call Georgia now," he said.

At 12:45 a.m. Wednesday morning, as Biden took to a parking-lot stage to speak to supporters, Trump dispatched a tweet that Twitter immediately flagged with a warning to readers.

"We are up BIG, but they are trying to STEAL the Election," the president wrote. "We will never let them do it. Votes cannot be cast after the Polls are closed!"

Twitter's warning said, "Some or all of the content shared in this Tweet is disputed and might be misleading about an election or other civic process."

We are up BIG, but they are trying to STEAL the Election. We will never let them do it. Votes cannot be cast after the Polls are closed!

Prior to Election Day, establishment media predicted a landslide for Biden, with The Economist estimating the president's chance of winning was 3% and Nate Silver's FiveThirtyEight giving him a 10% chance. 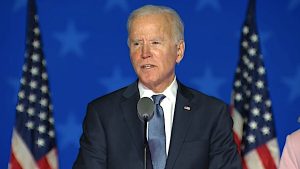 But when Biden spoke to supporters in Wilmington, Delaware, both candidates saw a path to victory through the Rust Belt states.

"Your patience is commendable," Biden said as car horns honked. "We knew this was going to go long, but who knew we were going to go maybe into tomorrow morning, maybe even longer?"

"We knew because of the unprecedented early mail-in vote that it was going to take a while," he said. "And it ain't over until every vote, every ballot is counted."

The Democrat said his campaign is "feeling good" about Michigan and Wisconsin, and thinks it will win Pennsylvania.

However, CNN's chief national correspondent, John King, said Biden would need to win 75% of the remaining votes in Pennsylvania to overcome the president's lead, which he called "a steep hill."

Trump won the battleground of Iowa by 7 points, while the former vice president has taken Minnesota.

Wisconsin says there's no way they are announcing a winner tonight

Per officials in those states

The Biden campaign believed Texas was in play, but the race has been called for Trump, who leads by nearly 6 points with 84% reporting.