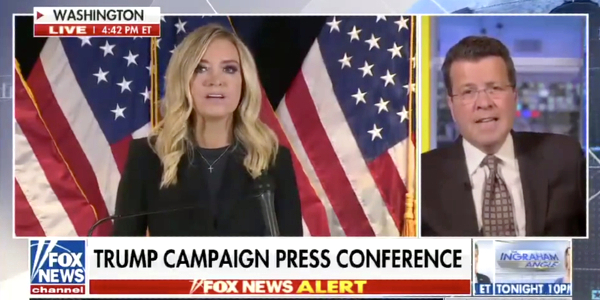 Fox News anchor Neil Cavuto cut away from a Trump campaign press conference Monday afternoon with Kayleigh McEnany, declaring the network could not "in good countenance" continue to air her "false claim" that the Democratic Party was "welcoming" vote fraud.

Cavuto picked up McEnany in progress saying there's "one party in America that opposes verifying signatures, citizenship, residency, eligibility -- there is only one party in America trying keep observers out of the count room, and that party, my friends, is the Democratic Party."

McEnany, the White House press secretary, said she was speaking in her capacity as a campaign adviser.

McEnany said the campaign's "position is clear, we want to protect the franchise of the American people."

"Whoa, whoa, whoa," the Fox News anchor said. "I just think we have to be very clear. She's charging the other side is welcoming fraud and welcoming illegal voting.

"Unless she has more details to back that up, I can't in good countenance continue showing you this," he said. "Maybe they do have something to back that up, but that's an explosive charge to make, that the other side is effectively rigging and cheating." 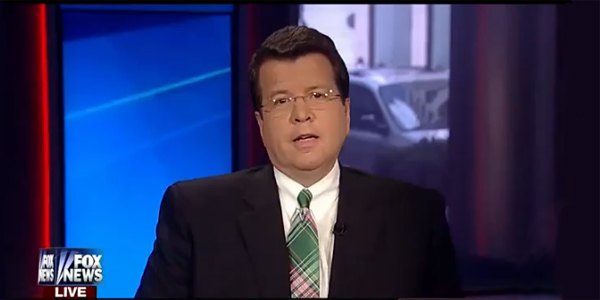 Cavuto promised that "if she does bring proof of that, of course we'll take you back."

"Not so fast," Cavuto said, heading into a break. "We'll have more after this."

Fox News cuts away from the Trump campaign press conference with Neil Cavuto saying that they "can't in good countenance continue showing this" when @PressSec says that Democrats are "welcoming fraud and welcoming illegal voting" in the election pic.twitter.com/0d5B5cJ0D8

"Another sign of the Murdoch media world tug-of-war I've been describing: Neil Cavuto cut off Kayleigh McEnany on his show while OTHER Fox shows are promoting the same kind of B.S. she was pushing," Stelter tweeted.

One of those Fox News hosts, in fact, rebuked Cavuto on Monday night.

"You can't simply tell people to accept an outcome, because  force doesn't work in a democracy. That's a dictatorship."

TUCKER takes aim at Neil Cavuto for cutting away from the Trump campaign's press conference today:

"You can't just cut away from coverage you don't like. Force doesn't work in a democracy. That's a dictatorship. Telling voters to shut up is never enough." pic.twitter.com/uxFbxdIJFR

"Remember, just because CNN or even Fox News says who's president doesn't make them president," Mitchell said. "So I think everybody wants to know this was done properly and legally and that we can trust the results. And I think we have to look at every one of these concerns."

Smith was taken aback by her colleague's response.

Sandra Smith, off-air, reacts to her colleague Trace Gallagher indulging a nutjob who denies the outcome of the election even after Fox News had called it for Joe Biden: pic.twitter.com/gZ4nrnVHab

The network came in a distant third to CNN and MSNBC. Before Election Day, Fox News averaged more than double the viewership of its cable-news rivals.