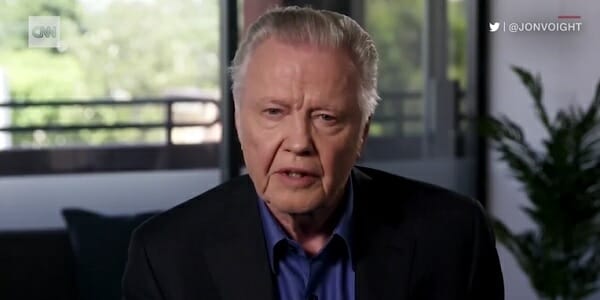 Slapped with the now perfunctory warning labels by Twitter and YouTube, a video posted Wednesday featuring Academy Award-winning actor Jon Voight countering "the lie" that Joe Biden has won the election is causing a stir on social media.

The dramatic actor, 81, contends America is in its "greatest fight since the Civil War."

"My fellow Americans, I stand here with all that feel as I do, disgusted with this lie that Biden has been chosen," he says, "as if we all don't know the truth."

Voight says the perpetrators won't get away with it, "and there will be a price to pay."

"This is now our greatest fight since the Civil War," he said, "the battle of righteousness versus Satan.

"Yes, Satan," he continued, "because these leftists are evil, corrupt and they want to tear down this nation.

"We must not allow this. We must fight this corruption that has taken over, and fight for the good that seems lost," he said.

He urged Americans to trust God "and fight now for Trump's victory, because we all know this ballot count is corruption, like they are."

"Let us fight this fight as if it is our last fight on earth," he said.

Reacting to the video, YouTuber "2 Mindz" said Voight is "another person suffering from Trump delusion."

"He just said 'Satan,'" the vlogger noted as he played the video.

"That is probably one of the scariest things I've seen this election cycle," he said upon completion of Voight's remarks.

"From the delusion of the fact that the election is corrupt, or something like that, to bringing God into it, to mentioning the Civil War -- all of that, like literally, like sent chills down my spine," the YouTuber said.

Others were perplexed: "Reported for having a point of view?"

In August, WND reported, Voight warned Americans not to be "fooled" by the Hollywood liberal elite who are using their public platform to join Democrats in "destroying this country with evil propaganda and ignorance."

"We as a nation must stop this now and must fight for our life now, and November's election is our chance to save the United States of America," he said in a brief video posted on YouTube.

Voight contended President Trump "is the only one who can save America," urging citizens to "vote for God's truths, the truths that our forefathers fought for."

"Don't be fooled by these singers and actors of Hollywood," he said. "They are polluted with disgrace and have no idea what truly to believe in. I know. I once was on the left until I was taught different, to see the truth.

"So hear me now. Our nation will crumble if you don't wake up."

Voight's credits include "Midnight Cowboy," "Deliverance," "Enemy of the State" and "24."

He won an Academy Award for best actor for his portrayal of a paraplegic Vietnam veteran in the 1978 movie "Coming Home."