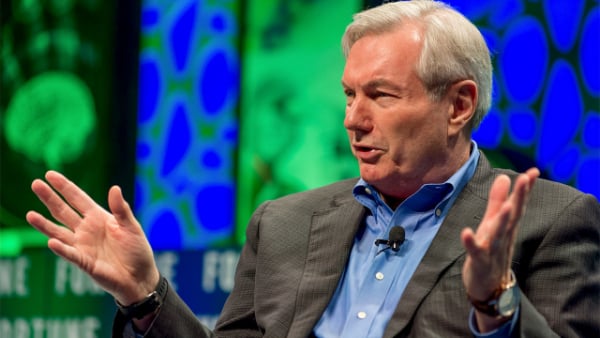 Biden coronavirus adviser Michael T. Osterholm, professor of public health and director of the Center for Infectious Disease Research and Policy at the University of Minnesota. (Creative Commons)

The coronavirus adviser to Joe Biden who is advocating a national lockdown of four to six weeks had a very different view of lockdowns in March, when he argued in a Washington Post op-ed that the economic and social costs are enormous and the science points to better alternatives.

Michael T. Osterholm, a professor and director of the Center for Infectious Disease Research and Policy at the University of Minnesota, said in an interview Wednesday with Yahoo Finance that Biden's coronavirus taskforce is preparing to "hit the ground running January 20th."

He contended that nationwide lockdown would curb the number of new cases and hospitalizations to manageable levels until a vaccine is widely distributed.

"We could pay for a package right now to cover all of the wages, lost wages for individual workers for losses to small companies to medium-sized companies or city, state, county governments. We could do all of that," he said. "If we did that, then we could lockdown for four-to-six weeks."

However, in a March 21 op-ed for the Washington Post, Osterhom, along with writer Mark Olshaker, warned of the high economic and social costs of "the near-draconian lockdowns" in effect at the time in China and Italy, which ultimately don't reduce the number of cases, only stretching them out over time.

"But how and when will these two 'test' nations return to normal life?" the professor asked. "And when they do, will there be a major second wave of cases? If that happens, should they simply 'rinse and repeat'?"

He said in March that "[a]s a country, with momentum building for a possible national shutdown directive, we are on the verge of ringing a giant bell that we don’t know how to un-ring."

The strategy he advocated in March is now promoted by epidemiologists at Stanford and Oxford advising Florida Gov. Ron DeSantis: With a 99% survival rate for most, let the healthy go about their business while protecting the vulnerable, the people over 70 with multiple life-threatening diseases.

Osterholm has not replied to a request for comment left at his University of Minnesota office.

The Great Barrington Declaration, which has been signed by more than 11,700 medical and public health scientists, calls for allowing the healthy to go about their business and focus on protecting the vulnerable.

In October, World Health Organization envoy Dr. David Nabarro warned leaders against relying on lockdowns to handle the coronavirus, saying they should be a last resort because of the harm they cause, including making "poor people an awful lot poorer."

"We in the World Health Organization do not advocate lockdowns as the primary means of control of this virus," Nabarro said.

Osterholm warned of a serious global pandemic in a 2005 piece for Foreign Affairs magazine in which his said that time "is running out to prepare for the next pandemic. We must act now with decisiveness and purpose." He reprised his warning in his 2017 book "Deadliest Enemy: Our War Against Killer Germs."

In his interview Wednesday with Yahoo Finance, he referenced an August New York Times op-ed he wrote with Minneapolis Federal Reserve President Neel Kashkari in which the two argued for more restrictive and uniform lockdowns across the nation.

"The problem with the March-to-May lockdown was that it was not uniformly stringent across the country. For example, Minnesota deemed 78 percent of its workers essential," they wrote. "To be effective, the lockdown has to be as comprehensive and strict as possible."

One of Biden's new coronavirus task force doctors floating the idea of a 4-6 week lockdown:

“We could pay for a package right now to cover all of the lost wages for individual workers ... if we did that, then we could lockdown for 4 to 6 weeks."pic.twitter.com/zNmuQvPpIJ

'Hard and painful choices are inescapable'

In contrast, Osterholm wrote for the Post in March that the nation may soon "have to acknowledge that attempting to stretch out cases in the hopes of keeping the curve reasonably flat is unworkable."

"Then, as we wait for either our scientific or natural redeemer to come, we can start trying to put things as back to normal as we can — doing our best to protect those at high risk, but acknowledging that people will get sick, some will die, and our health-care system is going to be overrun to a great extent no matter what we do," he wrote.

He emphasized in his Post op-ed there is "no black-or-white option here."

"We will have to figure out what shade of gray we can accept and apply. We will get through this, but hard and painful choices are inescapable," he said.

"Covid-19 will go away eventually in one of two ways. Either we will develop a vaccine to prevent it, or the virus will burn itself out as the spread of infection comes to confer a form of herd immunity on the population."

Osterholm pointed out in March that Hong Kong closed its schools while Singapore did not, "and there was hardly any difference in the rate of transmission."

In fact, WND reported in October a study published in the British Medical Journal concluded the closing of schools in response to the coronavirus pandemic could increase the number of deaths resulting from the disease.

The U.K. study found lockdowns were "highly effective at reducing peak demand for intensive care unit (ICU) beds." But they also "prolong" the epidemic by slowing the buildup of herd immunity, which then protects the vulnerable.

They concluded that "the somewhat counterintuitive results that school closures lead to more deaths are a consequence of the addition of some interventions that suppress the first wave and failure to prioritise protection of the most vulnerable people."

Meanwhile, with the prospect of a national lockdown, at least one Joe Biden supporter is now regretting her vote.

Famed feminist author Naomi Wolf, a former political adviser to Bill Clinton and Al Gore, said this week she was unaware of where the Democratic candidate stood on the issue.

If I’d known Biden was open to ‘lockdowns’ as he now states, which is something historically unprecedented in any pandemic, and a terrifying practice, one that won’t ever end because elites love it, I would never have voted for him.

COVID not a death sentence

As WND reported in early October, Professors Dr. Martin Kulldorff of Harvard, Dr. Sunetra Gupta of Oxford and Dr. Jayanta Bhattacharya of Stanford launched their Great Barrington Declaration stating that as "infectious disease epidemiologists and public health scientists we have grave concerns about the damaging physical and mental health impacts of the prevailing COVID-19 policies, and recommend an approach we call Focused Protection."

In September, Kulldorf and Bhattacharya participated in a roundtable with Republican Florida Gov. Ron DeSantis in which they said the widescale lockdowns actually increase the risk to the vulnerable, slowing down the building of herd immunity for the population.