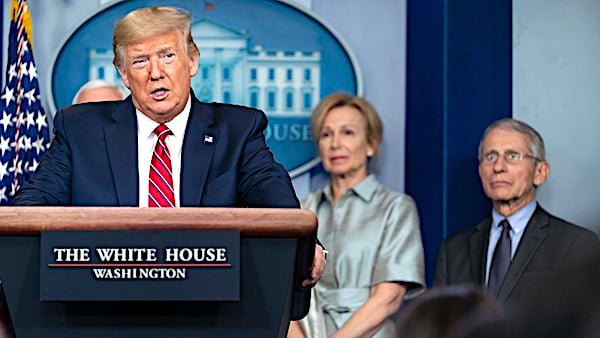 With governors imposing a second wave of lockdowns in response to the coronavirus pandemic, physicians who decry the politicization of a drug they have found to be an effective treatment for COVID-19 testified to the Senate's Homeland Security Committee on Thursday.

The panel's chairman, Sen. Ron Johnson, R-Wis., noted the drug hydroxychloroquine was used as a "weapon" in the presidential election after it was promoted by President Trump.

"The doctors who have had the courage to follow the Hippocratic oath and use their off-label prescription rights to treat patients using hydroxychloroquine have been scorned and state medical boards have threatened to withdraw their licenses," the senator said.

Johnson said he has publicly advocated for "allowing doctors to be doctors, to practice medicine, explore different therapies and share their knowledge within the medical community and with the public."

He said international, federal and state "closed-minded bureaucrats" have let down the public, driven by conflicting interests.

"Tragically, media and social media have failed to ask the right questions and censored what they do not understand," he said.

Noting a vaccine won't be available for months, Johnson said he hoped the hearing would help correct "a glaring blunder that has cost far too many lives."

However, Dr. Peter McCullough, the vice chairman of internal medicine at Baylor University Medical Center, contended the widespread use of hydroxychloroquine in March, April and May was what kept "the curve" down.

Risch said that in May, when he saw studies on hydroxychloroquine being misrepresented, he thought it simply was "sloppy reporting."

He said he was "astounded" that studies on hospitalized patients were being represented as applying to outpatients, in violation of what he was taught in medical school.

Over the past six months, he said government research institutions have invested billions of dollars in expensive inpatient treatments but almost nothing for early outpatient treatments, "the first line of response to this pandemic."

He said there are seven studies on use of hydroxychloroquine in high-risk patients, and every one has shown reductions of 50% or more in the risk of hospitalization and mortality, he said.

Risch said the FDA's withdrawal of emergency use authorization for treating COVID-19 with hydroxychloroquine should be immediately withdrawn, arguing the risk associated with the drug is much less than others the agency has approved, such as remdesivir.

He said that even if a vaccine is effective, people will still get sick and die, and effective early treatment is essential.

Risch was challenged by Dr. Ashish Jha, dean of Brown University’s School of Public Health, who insisted that every quality study of the drug's efficacy for COVID-19 has found no benefit, declaring there is a "clear consensus" on the scientific and medical community.

He pointed to a large randomized control trial published in the New England Journal of Medicine that found higher rates of death among hospitalized patients on hydroxychloroquine.

And he argued that the Food and Drug Administration withdrew its emergency use authorization for hydroxychloroquine.

"For hydroxychloroquine there was no sufficient evidence and the evidence that was there certainly did not suggest the benefits would outweigh the risks," Jha said.

But Risch reiterated his argument that many studies focused on hospitalized patients who were very sick and pointed to the studies showing its efficacy within first few days of infection.

A fourth physician who testified was Dr. George Fareed, medical director at Pioneers Health Center in the Imperial Valley in California, which was the epicenter for the virus in the state in June and July.

He said he treated successfully more than 1,000 high-risk patients with a cocktail of hydroxychloroquine, azithromycin and zinc, which was developed by Dr. Zev Zelenko, who told WND in April of his 100% success treating 350 coronavirus patients.

Fareed emphasized that healthy people, with no underlying conditions such as diabetes and heart disease, don't need treatment.

He said his experience is in line with all of the studies that Dr. Risch mentioned, with very few hospitalizations and not a single cardiac event.

Jha charged that hydroxychloroquine is actually dangerous, stating that in April there was "a 93% increase in related calls to the U.S poison control centers."

"These things can hurt," he said.

"Given the dismal failure of hydroxychloroquine to date, there is little scientific basis to think it will be effective for anybody," he said.

Johnson, noting the "huge disconnect between experts, Harvard and Yale educated," asked McCullough to respond to the poison-report issue and his own experience with being treated himself for COVID-19 with hydroxychloroquine.

"Senator, I want my testimony to be clear on the record that I think Dr. Jha's testimony is wreckless and dangerous for the nation," he said.

McCullough said the poison report is exactly what Sen. Peters is interested in.

The widespread use of hydroxychloroquine in the spring, he said, kept the first wave of the coronavirus "from skyrocketing."

The physician said the poison control center received 77 additional calls in April. When the reviewer looked at them, two-thirds had taken an extra dose.

Fareed, toward the end of the hearing, said he wondered "whether Dr. Jha actually treats patients, the way he talks."

Johnson asked Jha if he wanted to respond.

"As a practicing physician, I think a lot about the evidence," he said. "My patients want me to give them science-based treatments."

Johnson asked: "Have you treated any COVID patient?"

He noted the FDA on its website "cautions against use of hydroxychloroquine" for COVID-19 outside of the hospital setting or a clinical trial due to risk of heart rhythm problems."

But he pointed out that in the 400 clinical trials on hydroxychloroquine the FDA has approved, not one requires EKG monitoring.