A cyber-crime expert who recently was praised by the New York Times declared in a sworn affidavit in a Sidney Powell lawsuit that hundreds of thousands votes were shifted from President Trump to Joe Biden in battleground states.

Navid Keshavarz-Nia, the Times said in September in a glowing report, was regarded by those who worked with him as "always the smartest person in the room."

His expertise in big-data architecture, cloud computing, security and blockchain technology has been used by the CIA, the FBI, the National Security Agency, U.S. military counterintelligence and the Department of Homeland Security. 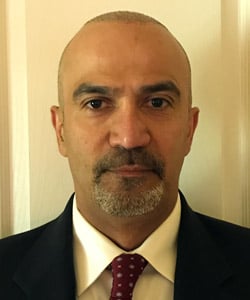 A vice president and senior director of information security for Black Key Solutions LLC, he also has been deployed by corporate financial giants such as Deutsche Bank.

His affidavit was filed with Powell's complaint late Wednesday in a Georgia court, the Gateway Pundit reported.

"I conclude with high confidence that the election 2020 data were altered in all battleground states resulting in a hundreds of thousands of votes that were cast for President Trump to be transferred to Vice President Biden," he wrote.

The alterations, he added, resulted from widespread vulnerabilities in voting software and systems that allowed a "Man-in-the-Middle cyber attack" by covert operators.

See an excerpt of his sworn statement: 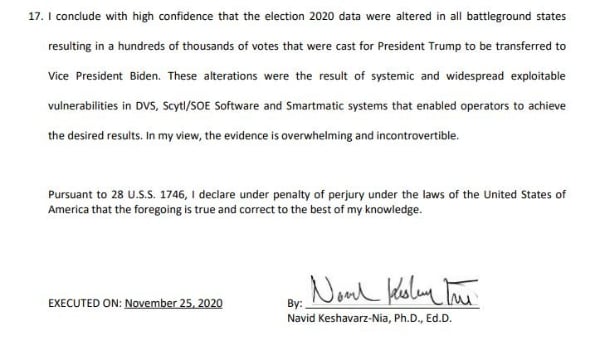 Earlier Wednesday, in Pennsylvania, Trump's personal lawyer Rudy Giuliani, along with state lawmakers, heard witnesses testify of fraud on election night, including the alleged dump of some 570,000 votes for Biden in the early morning hours after polls closed. On Election night, Trump led in Pennsylvania by nearly 700,000 votes with 65% reporting.

In a 104-page complaint in Georgia, Powell outlines a scheme allegedly aimed at "illegally and fraudulently manipulating the vote count to make certain the election of Joe Biden as president of the United States."