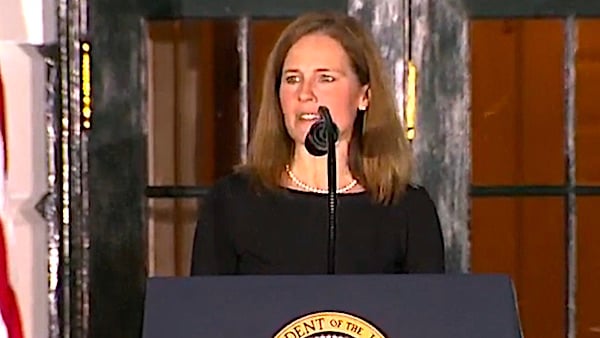 The United States is expected to gain more than 26 centuries of combined service from conservative judges appointed by President Trump.

The analysis is from First Liberty Institute pointed out that with Trump's appointments of Amy Coney Barrett, Brett Kavanaugh and Neil Gorsuch, "balance has been restored" at the Supreme Court for the first time in nearly a century.

"The nation's highest court is now comprised of justices who will interpret the law according to the written word and original intent of the Constitution, and who will carry out their constitutional duties as judges instead of legislating from the bench."

Such "legislating" has been demonstrated in the Obergefell same-sex marriage, which Chief Justice John Roberts concluded was unrelated to the Constitution.

The Supreme Court's return to an originalist interpretation of the Constitution, First Liberty said, "will most certainly have a profound impact on the law and the future of our country."

But First Liberty pointed out that only about 1% of all cases make it to the Supreme Court, with the rest decided in the district courts and courts of appeal.

The significant number of Constitution-focused judges appointed by Trump at those levels "could impact our freedoms for decades to come," the report said.

Four years ago, at President Trump's 2017 inauguration, there were more than 100 federal judicial vacancies, about one-eighth of the corps nationwide.

President Trump has nominated more than 200 systemwide, and now there "are currently 405 conservative-appointed judges compared to 397 liberal-appointed judges, representing a 127-judge swing."

That means, First Liberty said, "the probability of a religious liberty case being heard by a principled, constitutionalist judge (or a panel of them) are the highest they have been in decades."

Also, the study noted the average age for a Trump appointee is 49, and the average expected tenure is 30 years.

"When you aggregate the judicial service of circuit court appointees and the more than 150 federal district court judges appointed under the president, it’s expected that the nation will receive more than 2,600 years of combined conservative judicial service," the study said.

The institute pointed out that work still remains, with dozens of judicial vacancies and more expected in the coming four years.

If Democrat Joe Biden is in the Oval Office, a GOP-majority Senate would be able to prevent confirmation of activist judges. If Trump's challenges to the election outcomes in several battleground states is successful, there will be more constitutionalist judges to come.