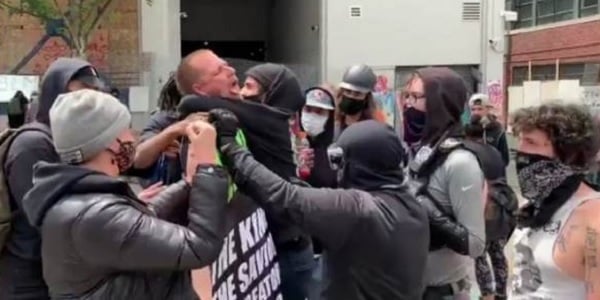 A self-designated Antifa leader in Pittsburgh threatened "armed" action against supporters of President Trump if the president didn't concede the election, vowing to block roads in "conservative areas."

However, Brandon Straka, the founder of the walkaway campaign to leave the Democratic Party, captured an image of it.

Antifa is just “an idea”- @JoeBiden

It’s time for us to end this idea. pic.twitter.com/jUqVMdJTt4

He posted Joe Biden's claim during the first presidential debate with Trump that Antifa is just "an idea."

Straka commented: "It's time for us to end this idea."

The Antifa leader wrote to Trump:

Do you expect leftists to increase violence against Trump supporters in the near future?
97% (1109 Votes)
3% (29 Votes)

If you do not concede by Sunday at noon, we will begin to block roads in conservative areas.

Your supporters will not be able to go to work or to the grocery store to feed their families.

We are armed & will retaliate to attempts at vehicular manslaughter.

The Gateway Pundit noted other tweets from Rahuba, including: "If you have children and you let them see their MAGA grandparents, I don't respect you" and "This attitude is why I'm done targeting conservative politicians and have begin (sic) operations directly against MAGA voters."

Rahuba also said he was offering people rides to the polls on Election Day.

Conservative activist Robby Starbuck created a video he posted on Twitter to show Biden and his supporters that Antifa is a well-organized, violent domestic terror group.

You all helped make this happen. It would be a shame if tons of voters saw just how ridiculous Joe Biden’s Antifa claims are. Antifa isn’t an idea Joe, they’re 100% organized. #JustSayNoToAntifaJoe pic.twitter.com/CMVdh9RpGL