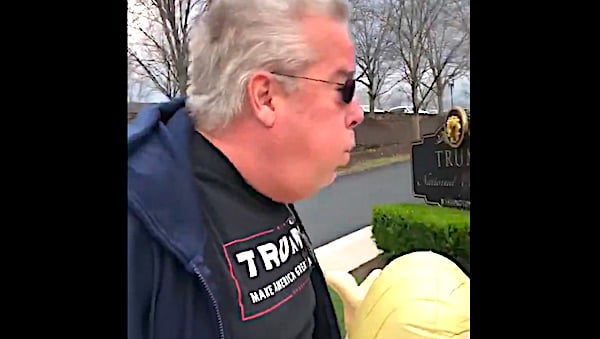 A supporter of President Trump is seen on video exhaling without a mask on a protester outside the Trump National Golf Club in Virginia on Nov. 21, 2020. (Video screenshot)

A supporter of President Donald Trump was charged with assault after he appeared to intentionally exhale on two protesters outside Trump National Golf Club in Virginia, police said.

Raymond Deskins, 61, was captured on video forcefully exhaling on two women who were protesting President Donald Trump outside his Sterling, Virginia golf club on Saturday, according to the Associated Press. The Loudoun County Sheriff’s Office said that Deskins was charged with misdemeanor assault on Sunday for his actions.

“Do what you want,” said Deskins, who was wearing a “Trump: Make America Great Again!” shirt, video of the incident showed. “I’m not in anybody’s face.”

“That’s assault,” responded one of the protesters after Deskins breathed on her.

Trump supporter forcefully exhaling without a mask on a protester outside the Trump National Golf Club, Nov. 21, 2020 pic.twitter.com/Bq2mMH1At0

Protesters often demonstrate outside Trump’s Virginia golf course when the president visits the facility to golf, according to the AP. Sometimes they are met with counter-protesters and Trump supporters like Deskins.

Kathy Beynette, who was in the group of protesters, told CBS News that Deskins crossed the street and initiated the altercation while they awaited Trump’s arrival.

Members of the Loudoun County Board of Supervisors wrote a letter to the sheriff’s office Sunday demanding a full investigation of the incident, the AP reported. When officers arrived at the scene on Saturday, they recommended the protesters seek a warrant through the county magistrate since they hadn’t witnessed the altercation.

Democratic Gov. Ralph Northam announced new coronavirus restrictions on Nov. 13, which included an expanded mask mandate. However, masks are not required to be worn outside.

Virginia has reported 217,796 total coronavirus cases and 3,938 deaths since the outbreak of coronavirus in the spring, according to The New York Times.