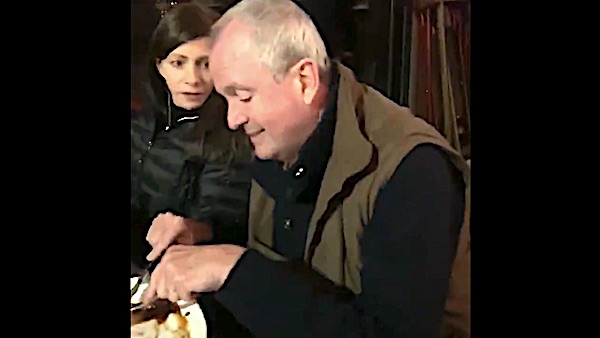 Gov. Phil Murphy, D-N.J., caught on camera with his family without a mask. (Video screenshot)

Democratic New Jersey Gov. Phil Murphy was confronted by several angry people as he ate outside a restaurant with his family, a video posted Sunday shows.

Video footage posted by the Twitter account Breaking 911 showed the New Jersey governor eating outside a restaurant with five other people the account identified as his family members.

New Jersey Governor Phil Murphy confronted while having dinner with his maskless family.

The video showed Murphy taking a bite of food as a woman said, “Oh my God, it is,” apparently discovering that the person sitting at the table was indeed the governor of New Jersey.

“Oh my God, Murphy, you are such a d***,” the woman said, as another woman can be heard saying repeatedly, “How you doing? How you doing? You having fun with your family in the meantime? You’re having all kind of other bullshit going on at your house?”

Murphy continued eating as he smiled, the footage showed. No one at the table was wearing a mask at the beginning of the video. New Jersey requires people masks in all businesses except when it is impractical, like when a person is eating.

“Are you guys a little too drunk,” one of Murphy’s sons asked the women. “Can you put your mask on?”

“No I’m not drunk, as a matter of fact,” one of the women responded. “You can go [expletive] yourself, how’s that? You know why I don’t need a mask? Because there ain’t nothing [expletive] wrong with me.”

“You don’t have a mask on,” another woman said to Murphy’s son.

Murphy’s son responded by saying he liked one of the women’s “Trump phone case,” pointing to his father and saying, “Guess who Trump likes? He likes my dad.”

The video shows Murphy putting on a mask as the footage ends.

It was not immediately clear when the video was taken, though it was posted late Sunday evening, the same day that Murphy announced that he is extending the state’s public health emergency declaration due to continued spikes in coronavirus cases.

“The state has experienced significant upticks in the rate of reported new cases across all counties, demonstrating the need for many of the state’s current measures to remain in place, both to reduce additional new infections and to save lives,” Murphy said, according to NJ.com.

Murphy’s office did not immediately respond to a request for comment from the Daily Caller News Foundation. The governor previously came under fire in June when he said he couldn’t “imagine” telling protestors to stay home during the coronavirus pandemic.