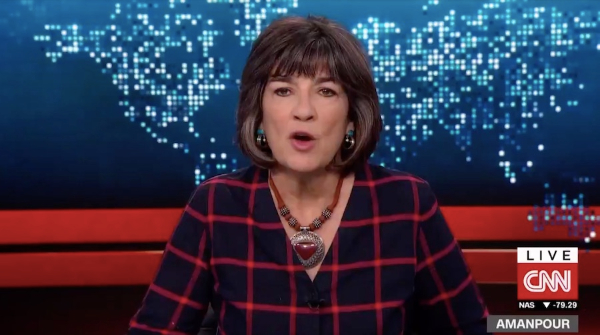 Noting the anniversary of the Kristallnacht pograms against Jews, CNN's Christiane Amanpour on Thursday compared President Trump's four years in office to the Nazi "attack on fact, knowledge, history and truth."

In the introduction to her London-based global affairs show, "Amanpour," she noted the 82nd anniversary this week of Kristallnacht, in which Nazi stormtroopers across Germany destroyed and ransacked Jewish homes, hospitals and schools.

"It was the Nazis' warning shot across the bow of our human civilization that led to genocide against a whole identity," she said.

"And in that tower of burning books, it led to an attack on fact, knowledge, history and truth," Amanpour continued as period film footage rolled.

"After four years of a modern-day assault on those same values by Donald Trump, the Biden-Harris team pledges a return to norms," she concluded.

Her analogy drew widespread condemnation on Twitter, the Times of Israel reported.

"This is @camanpour on @CNN comparing Trump’s tenure to Nazi Germany. How the hell is this sort of prejudice tolerated on mainstream media? Third rate rubbish," wrote Ben Habib, a British former European Parliament member for the Brexit Party.

The Orthodox Jewish Public Affairs Council wrote: "Despicable. @camanpour compares verbal fact checking of a POTUS to a Nazi pogrom in which dozens of Jews were murdered."

The Times of Israel noted an advertisement released in September by the Jewish Democratic Council of America comparing the rise of fascism with the Trump presidency was condemned by the Anti-Defamation League.

In a column in August, WND's David Kupelian posed the question: "Why do top Democrats and their media allies continually liken Trump to Hitler, when the comparison is so obviously extreme, reckless, deranged, dangerous and frankly evil?"

It's not merely because they detest Trump, he argued, it's "far more purposeful and strategic than that."

"Casting Trump as Hitler, and his supporters as deplorable white-supremacist neo-Nazi types, comprises the entire moral core of the Democratic Party’s claim to be the rightful inheritors of permanent political power in America, starting in November," he wrote.

Further, "if you were truly fighting a genocidal monster like Hitler, almost nothing would be out of bounds for you. Essentially there would be no rules – and that’s exactly the way the left likes it. No rules."