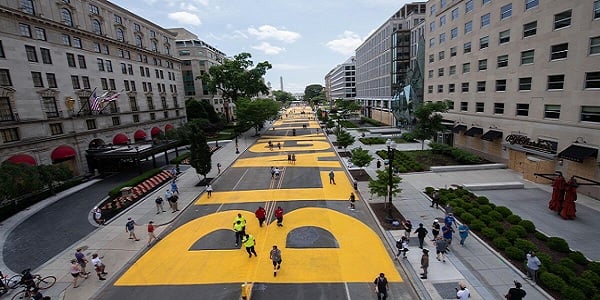 The city of Washington, D.C., and Mayor Muriel Bowser have been sued for arresting two students for chalking pro-life messages on a sidewalk while allowing left-wing political messages to be painted on streets.

The case has been filed in U.S. District Court in Washington by the Frederick Douglass Foundation, Students for Life of America and several individuals.

It argues the city allowed the writing of political messages on city streets in huge letters of yellow paint declaring "Black Lives Matter" and "Defund the police."

The pro-life activists wanted to write "Black pre-born lives matter" on the street in chalk but were threatened by police officers even after they obtained a permit to assemble.

The case is being handled by the Alliance Defending Freedom.

"The government can't discriminate against certain viewpoints by allowing some voices to be heard while silencing others," said lawyer Elissa Graves. "Because of the city’s actions, Frederick Douglass Foundation and Students for Life of America weren’t able to participate in the public square as other groups have. The First Amendment prohibits the government from picking and choosing whose speech to allow."

Students for Life had obtained a permit for a rally.

It was a Metropolitan Police Department official who gave verbal permission to chalk their message.

"Based on that, the two groups gathered at approximately 6 a.m. on Aug. 1; however, several law enforcement officers waiting for them informed them that, if they used paint or even washable sidewalk chalk on either the street or the public sidewalk, they would be arrested. Despite this warning, two students began to chalk 'Black Pre-Born Lives Matter' on the public sidewalk and were immediately arrested," the legal team said.

"The city shouldn’t be able to silence and punish us for expressing ideas that it doesn’t agree with," said Frederick Douglass Foundation Virginia Chapter President J.R. Gurley. "Government officials can’t discriminate against peaceful displays on the basis of our beliefs about abortion when they have allowed other groups the same avenues to express their beliefs. If the mayor allows other messages to be painted and chalked, we should be able to express our views in the same manner without fear of unjust government punishment."

Kristan Hawkins, the president of Students for Life, said: "We are seeing incredible opposition to the pro-life speech of our students as they speak for the most marginalized and defenseless among us. The Constitution guarantees the right to peacefully express our views in the public square. If there is disagreement over contentious issues, the answer is always more speech, not censorship, fines, or jail time."

The complaint stated that the plaintiffs "were prohibited from communicating their message, even though other messages are no permanently emblazoned along the streets of the district in a nearly identical format."

"The only difference between the plaintiffs' desired mural and the other permitted – and permanent – murals is the content of the message."

The city, therefore, used its laws to "silence disfavored speech," the filing said.

"It is axiomatic that the government cannot choose which message succeed and which are censored in our divrse society," it continues. "As the Supreme Court has emphatically held, 'the people lose when the government is the one deciding which ideas should prevail.'"

"The defendants' actions are blatant viewpoint discrimination, which the United States Constitution does not tolerate," the complaint said.

The filing points out that the city has a law against "the defacement" of public property, which bans any effort "to write, mark, or print obscene or indecent figures" or to mark "any property, public or private, building, statue, monument, office, public passenger vehicle, mass transit equipment or facility, dwelling or structure of any kind."

Although neither of the original protest signs were given permits, there was "no punishment."

The case alleges multiple violations of the First Amendment and seeks a declaration that the existing defacement ordinance is unconstitutional as it applies because it is applied unequally. It also seeks injunctions for future events, an award of actual and nominal damages.