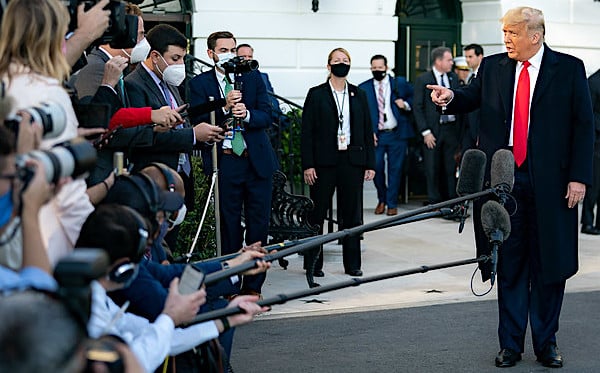 Tucker Carlson was recently commenting on the media’s atrocious pre-election bias – from their wanton lying to protect Joe Biden, to their defamation of honest whistleblowers as Russian disinformation agents, to their flat-out refusal to cover major stories exposing the Biden family’s monumental corruption. He ended with this prophetic warning:

“When the smoke clears from this election, there’ll be a massive realignment in the media, no matter who wins. Because they showed who they are. And it’s so unappealing, it’s so far from journalism, that it can’t continue.”

Tucker is correct. No matter how this election charade ends, the media landscape will be forever changed. Most so-called “mainstream journalists” have disgraced themselves beyond repair, having proven they are no better – and no different – than Pravda, the pretend “newspaper of record” in the former Soviet Union that was actually just a craven, lying, servile propaganda operation for that totalitarian regime’s ruling elite.

After all, within hours of President Donald Trump disclosing that both he and Melania were infected with the Chinese coronavirus, the media pounced on him, saying he had it coming. CNN anchor Don Lemon speculated on whether Speaker of the House Nancy Pelosi might become president, while former Barack Obama staffer and Hillary Clinton national spokeswoman Zara Rahim wrote, "I hope he dies." Just before that, The Atlantic, which had recently published a high-profile libelous story claiming President Trump hates and mocks war heroes, published a second, similar high-profile libelous story claiming Trump hates and mocks Christians.

Enough! As Tucker said, this insanity “can’t continue.” Americans won’t stand for it.

Thus, whatever the future holds after this election, Americans are going to need, more than ever, a courageous and truthful “free press” to help the good people of this country navigate what promises to be a tumultuous, dangerous and unpredictable era ahead. Because even if Trump is re-elected, the left’s madness, violence, intimidation, nonstop lying, revolutionary lawlessness, massive hoaxes and demonization of the innocent will not stop – in fact, they will almost certainly increase.

WorldNetDaily fully intends to remain a key part of America’s truth-proclaiming free press in the days, months and years to come. Indeed, our motto since 1997 – long before most of the rest of the online media pack even existed – has been “A Free Press for a Free People.”

Unfortunately, I’m sorry to say powerful forces are hard at work attempting to destroy us. Recently, three major international online advertising companies that had long served ads on WND – our main source of revenue and sustenance – all suddenly decided, at the same time, to cancel WND in the run-up to the most important presidential election of our lifetimes. The ad companies blacklisting WND – namely, TripleLift, AppNexus/Xander and Teads – all cited vague breaches of their terms of service (i.e. “any content that is illegal or otherwise contrary to any applicable law, regulation, directive, guideline or order, including without limitation any misleading, unethical, obscene, defamatory, deceptive, gambling-related or hateful content,” etc.). You get the idea: If they don’t like your politics, you’re cancelled.

Even worse than losing key ad companies: A few months ago Facebook suddenly decided to massively suppress WND’s traffic on their platform – which forms a key part of our overall reader engagement, since WND has close to a million Facebook friends. Why is Facebook massively suppressing WND? No reason given, despite repeated attempts to find out from them. As a result, WND’s overall traffic, and therefore our revenue, is down significantly and painfully from what it was a few months ago.

Meanwhile, Google has virtually written WND out of its search algorithm so that unless you specify “WND.com” in your search terms, WND rarely shows up. The Southern Poverty Law Center, the leftwing hate group that many Big Tech companies rely on to identify hate groups, sees WND as a hate group – specifically, one engaging in “manipulative fear-mongering and outright fabrications designed to further the paranoid, gay-hating, conspiratorial and apocalyptic visions … from the fringes of the far-right and fundamentalist worlds.” Translation: We’re conservative and Christian.

I could provide many more examples, but the point is clear.

So WHY do they do this to WND?

It’s not because we are “conspiracy theorists” or “white supremacists” – or as one of the three advertising companies that just blacklisted us alleged, because we engage in “hate speech.”

It’s because we dare to publish the truth, something basically forbidden in today’s leftwing-dominated news and information culture.

That’s right, the truth – what a concept! The truth about Joe Biden’s decades-long family corruption, serial plagiarism, continual lying, dismal half-century track record, growing dementia and more. The truth about Kamala Harris being rated by the nonpartisan GovTrack.us as the most leftwing member of the U.S. Senate – further left than Bernie Sanders (not to mention being one of the most dishonest, vacuous, insincere, abrasive, condescending and excruciatingly unlikeable candidates for high office in our lifetime). The truth about the Chinese coronavirus – about what real science actually says about masks, about lockdowns, about medications like hydroxychloroquine, about school openings, about the importance of early treatment and much more. The truth about Hillary Clinton being the actual villain at the heart of the whole Trump-Russia collusion hoax. And much more – including the truth about America’s “mainstream media” having morphed fully into the militant, continually lying propaganda wing of the Democratic Party.

We at WND, particularly Joseph Farah and myself, have been warning America for over three years – longer than virtually any other journalists, since shortly after the 2016 election – that Big Tech intended to crush conservative expression and to do everything within their power, moral or immoral, legal or illegal, to prevent Donald Trump’s re-election. They’re doing precisely that right now, and WND is in danger of being mortally wounded in this war.

Please help us. We have been hit hard. It’s very difficult for us to pay our terrific and dedicated journalists, all of whom have taken major pay-cuts and missed paychecks entirely.

I won’t prolong my request: If WND dies, the world will go on, but (and hopefully you would agree) it will have lost something valuable and needful. And I can promise you, the Left – from Big Tech and the “mainstream media” to the Democratic Party and their rioting street goons – would be overjoyed to gloat over the demise of America’s original, pioneering, independent online news source, now in its 24th year.

I know you’re receiving a lot of donation appeals right now; that’s how it is at election time. But please consider our request.

As Thomas Jefferson so astutely said about America’s wellbeing, “The only security of all is in a FREE PRESS.” Jefferson was right; an honest, truth-based press is precious and essential for a free society. To keep America’s free press alive, please take a minute to make a donation of any amount. Everybody at WND will be enormously grateful.

One final thought: Whatever happens in Tuesday’s election, the good people in America are going to need to stick together. As I said, even if Trump wins, the left will go crazy. (Yeah I know, they’re already crazy – but I mean crazy violent.) If Biden wins … well let’s not go there. Either way, expect the media to lie their heads off like never before.

But if you want honest news reporting by journalists who honor God, America and the Constitution, please help us out now, so we can be there for you in the months and years to come. In other words: Let’s help each other.

Thank you and God bless you,