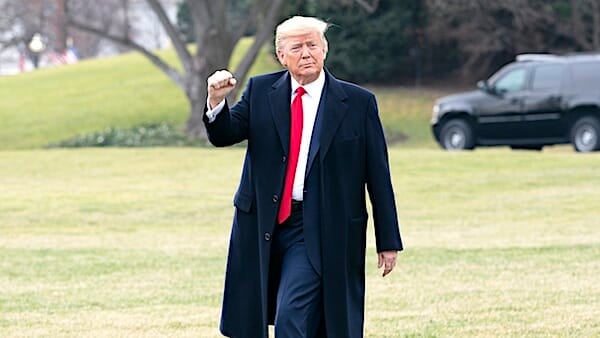 Democrats didn’t anticipate a late surge in Latinos voting for President Trump in Florida, and it’s giving them nightmares.

“I had trouble sleeping last night – it is stressing me out,” lamented Matt Isbell, a Florida-based Democratic data analyst, in an interview with RealClearPolitics.

In almost every battleground state, Trump is trying to drive up votes in the reddest, rural areas. Not so in Florida, a must-win for the president, where his path to victory or defeat runs straight through the heart of Miami-Dade County, which is nearly 70% Hispanic.

Shifting political allegiances in the Sunshine State’s largest population center are creating a groundswell of support for Trump, whose rise to power was fueled in part by his hard-line immigration agenda. Trump and his GOP surrogates have hammered home warnings that Joe Biden and left-wing Democrats would push the country toward socialism. Isbell and other Democratic campaign operatives in Florida say it’s a message that’s resonating in a state where more than half the population was born in another country.

Trump continued making the pitch during a rally Sunday at the Miami-Opa Locka Executive Airport that drew thousands and ended well after midnight.  “Our opponents want to turn us into communist Cuba or socialist Venezuela, and we’re not going to let that happen,” he told the crowd, who interrupted his remarks several times with shouts of “Viva Trump!” and “God bless, Trump.”

The Biden campaign was fighting for control of Florida’s solidly blue turf while several prominent Democrats bemoaned the nominee’s lackluster ground game across the state. Kamala Harris delivered remarks at Florida International University and made an appearance in Miami Gardens on Saturday. Biden and Trump held dueling rallies in the state on Thursday, and the former vice president earlier this month visited Miami’s Little Havana and Little Haiti neighborhoods. Barack Obama was in North Miami for Biden last weekend and will be back in South Florida on Monday.

“I think this is the first visit to Miami Gardens of anybody on the ticket — at least this cycle,” Harris said Saturday, highlighting her support for criminal justice reform and investing in black communities in the largest majority-black city in the state. “But it was very important to me these three days before the election.”

Democrats harbor some concerns about black voter turnout in early voting, but if Trump manages to pull off a win in Florida, he’ll have Latino voters to thank for it. Many have swung his way over the last several years after witnessing Venezuela’s economic collapse under strongman Nicolas Maduro’s brutal rule.

Scenes of the Maduro regime rationing food and water amid abject poverty over the last few years has shaken Cuban American, Venezuelan, Colombian, Nicaraguan and other immigrant communities in South Florida that fled brutal regimes, making them more receptive to Trump’s anti-socialist message, according to interviews with both Florida Democratic and Republican political consultants.

In 2016, Trump was bested by Hillary Clinton among Florida’s Latinos by a decisive 62%-35% margin, while Trump held an edge among Cuban Americans, 54%-41%, according to a Pew Research survey. The vote this year is  unpredictable, with polls varying wildly. An NBC-Marist survey last month showed an even split in Florida between Trump and Biden at 48% apiece, while Monmouth University gave Biden a huge 58%-32% advantage.

In early voting, both Democrats and Republicans report seeing a bigger shift to Trump this year among Cuban Americans and Venezuelan Americans in Florida.

“The Venezuelan collapse is a major boon for Republicans and has become baggage for Democrats, whether they deserve it or not — and I don’t think they do,” Isbell told RCP. “The Venezuela collapse has reignited that socialist-communist fear and paranoia in the communities.”

Isbell labeled New York Rep. Alexandria Ocasio Cortez, a self-described Democratic socialist, a “real bogey man or woman” in South Florida, fueling serious concerns that Biden is going to be taking orders from her and the left wing of the party. “When Republican Hispanics want to talk about socialism, they use her,” he added. “The argument is Biden’s going to be a puppet, a straw man for the real left wing.”

Biden has tried to allay this fear, pledging that his administration would do a better job at standing up to repressive regimes. Democrats have also slammed Trump for failing to make deportation exceptions for immigrants fleeing Cuba, Venezuela and Nicaragua.

“Cuba is not closer to freedom and democracy today than it was four years ago,” Biden said during a swing last week through Coconut Creek, a city just inland from Fort Lauderdale. “In fact, there are more political prisoners and the secret police are as brutal as ever, and Russia once again is a major presence in Havana.”

There’s no chance Trump wins Miami-Dade, a Democratic stronghold. The goal is to make a 10-point or higher improvement in his abysmal 2016 showing to compensate for expected losses elsewhere in the state among older voters and suburban women. A smaller loss in Miami-Dade would also help counter a heavy blue tide in adjacent Broward County, where Harris held events Thursday and Saturday.  (Even though Trump lost Miami-Dade, he ended winning Florida itself by a razor-thin 1.2-percentage-point margin in 2016. The RealClearPolitics poll average this weekend has the Democratic ticket ahead in Florida by 1.4% -- but falling.)

Early voting statistics show Trump within striking range of that goal in Miami-Dade. By Saturday morning, Republican turnout in the predominantly blue county of 1.5 million voters was nearly 300,000 — much higher than in every other county in Florida. It’s a turnout rate 5.5 percentage points higher than average for Republicans and 7.7 points higher than their Democratic counterparts in the county, the Miami-Herald reported over the weekend.

Team Trump views the higher rate of early GOP voting in Miami-Dade as a sign of a shift among Hispanic voters. It follows a number of massive Trump car caravans and boat parades that have taken place in the area in the months before the election. The early voting center at the Westchester Regional Library, the heart of the Cuban American suburb, has been the busiest in the state, according to local media reports.

At the Coral Gables Public Library voting site, scenes have resembled makeshift fiestas with cars flying Trump flags and horns honking while Latin music plays in the background. The music group Los Tres de Habana has been showing up at different voting sites, snapping photos with fans. The trio’s popular salsa song, “I’m Going to Vote for Donald Trump,” went viral a few months ago and has been used in several Trump Spanish-language ads. Cuban American social media personality Alex Otaola, who went from supporting Hillary Clinton in 2016 to a strong Trump backer, also visited polling places over the weekend. His Facebook Live show gets 100,000 views a day.

“This type of enthusiasm for a [Republican presidential candidate] is unprecedented in South Florida,” said Jason Poblete, a veteran Washington D.C. attorney and former GOP staffer on Capitol Hill who grew up in Miami. “Not even during the Reagan years when I was starting out in politics have I seen this much ground game from the Republicans.”

Tim Murtaugh, Trump’s communications director, on Friday projected confidence about Florida, predicting a bigger victory there than in 2016.   He reported that Republicans have knocked on 3 million doors in the state, compared to the 300,000 Democrats have reported they’ve canvassed.

“The bad news: GOP turnout rates are higher than Democrats in [Miami-Dade],” Florida Democratic strategist Steve Schale, who led Barack Obama’s winning Florida campaign, wrote in a blog post last week. “The GOP machine is very good in Miami and particularly in the Cuban community. There is a real effort to get people to vote by mail and vote early.”

Democrats across the state had a big lead in early voting just a week ago, but Republicans have whittled it down every day since then. As of Sunday morning, Democrats had cast 39.2% of the votes, or 3.4 million, while Republicans had 38.1%, or 3.32 million, and “no party affiliation” voters had 21.3% of the vote or 1.855 million, according to Florida secretary of state data.

Democrats started sounding the alarm late last week, worried that party operatives didn’t move quickly enough over the summer to knock on doors after the Biden campaign’s decision not to do so during the early months of the pandemic. Miami-Dade County turnout is down from 2016 among black voters as well, although the Biden camp hoped to use this weekend and a “Soul Sunday” event with black churches to help mobilize black voters.

Rep. Frederica Wilson, a longtime member of the Congressional Black Caucus who represents Miami’s heavily black congressional district, publicly lashed out at the Biden team for failing to respond to her request to fund canvassing and get-out-the-vote efforts. “We did not get the kind of funding for different vendors who would do that type of work until late in the campaign,” she told Politico last week.

Even though the Biden campaign was raising record sums, $363 million in September alone, Wilson said they weren’t responding to her entreaties.

“I screamed. Hollered. I called. I lobbied from the top to the bottom,” she said, noting she had sent written proposals and pressed her case to Biden advisers in Zoom meetings.

Latino organizer Armando Ibarra said support for Trump in South Florida started out in an organic way, fueled by Otaola and other well-known local celebrities, but the party followed up with a well-organized ground game.

“Earlier this year, when we opened our Latinos for Trump office, we were seeing 300 people a day coming in to register to vote – I’ve never seen anything like that,” he said. He notes that the Florida Federation of Young Republicans has made approximately 1.7 million voter contacts through knocking on doors, phone banking and peer-to-peer texting.

There’s a new dynamic among younger Cuban immigrants who are coming back to the GOP, the party of their parents, Ibarra argues.

“Younger Cuban Americans were kind of cool on the Republican Party and Trump, and they just swung so strongly toward Trump over the last few years because the president has put maximum pressure on the regime in Cuba,” he said. “We’re making up a lot of ground this year, and we may actually get very close, if not outright win, the Latino vote in Miami-Dade.”