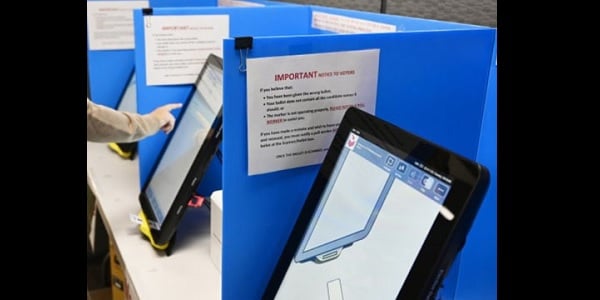 Dominion Voting Systems, facing charges by Trump campaign lawyers that its machines were used to manipulate votes in favor of Joe Biden, admits it made a donation to the Clinton Foundation and hired a former staffer of Democratic House Speaker Nancy Pelosi but denies other charges.

In a statement it said is "setting the record straight," the company denied an "unsubstantiated claim about the deletion of 2.7 million pro-Trump votes that was posted on the internet and spread on social media has been taken down and debunked by independent fact-checkers," Just the News reported.

"No credible reports or evidence of any software issues exist. Dominion equipment is used by county and state officials to tabulate ballots," the company said. "Human errors related to reporting tabulated results have arisen in a few counties, including some using Dominion equipment, but appropriate procedural actions were made by the county to address these errors were made (sic) prior to the canvass process."

It said a Michigan county where some 6,000 votes were shifted from Trump to Biden was the result of "user-error," not a "computer glitch," as was originally claimed.

"Assertions of voter fraud conspiracies are 100% false," the company stated. "The U.S. Department of Homeland Security's Cybersecurity and Infrastructure Security Agency has debunked numerous claims, including claims about the existence of a secret CIA program for vote fraud called Hammer and Scorecard."

Just the News reported the company also denied "rumors of a secret U.S. military raid on purported servers in Germany and ownership interests and other influence in the firm by prominent Democratic families."

Dominion said it "has no company ownership relationships with any member of the Pelosi family, the Feinstein family, or the Clinton Global Initiative, Smartmatic, Scytl, or any ties to Venezuela."

However, attorney Sidney Powell, who is representing President Trump in challenges to the election result, said in media interviews Dominion was used to obtain "rigged" results for Biden.

She promised forthcoming evidence will show the vote count was manipulated.

"It's a feature of the system that was designed with a backdoor, so that people could watch, in real time, and calculate with an algorithm how many votes they needed to change to make the result they wanted to create," Powell said Sunday on Sinclair's "America This Week with Eric Bolling." "It's incredibly disturbing, and we will hopefully have evidence of it before the end of the week that we can produce publicly."

Even Democratic leaders in Congress warned a year ago that Dominion voting systems are "prone to security problems."