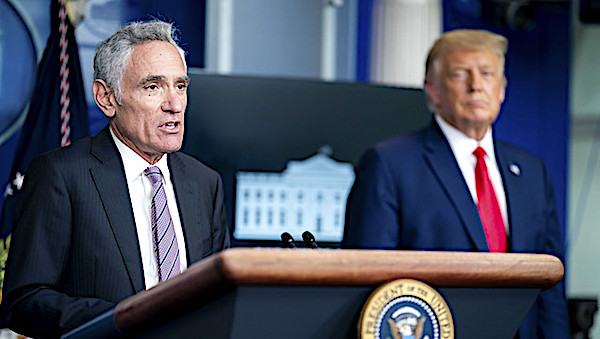 Dr. Scott Atlas, a member of the Trump administration’s coronavirus task force, publicly criticized Dr. Anthony Fauci Tuesday night, calling him a “political animal” and accusing him of adjusting his outlook on the pandemic once Election Day had passed.

Atlas’s remarks came on Fox News’ “The Ingraham Angle” after host Laura Ingraham juxtaposed earlier comments that Fauci made about the timeline of a vaccine with more optimistic comments he made Tuesday after Pfizer announced that their vaccine was over 90% effective.

“There’s all kinds of prognostications that were made — all negative, all to undermine what the reality of the timelines were, all to undermine the president,” Atlas said. “And I think, you know, once you do that sort of thing and make yourself a political animal, basically, you lose your credibility.”

Atlas’s remarks echo those of the president, who has criticized Fauci and suggested last week that he would fire him after Election Day.

Atlas, a radiologist by training, has become one of the most influential figures on the task force due to his more optimistic outlook on the pandemic. His credentials are quite different from Fauci, an immunologist who has led the National Institute of Allergy and Infectious Diseases since the 1980s.

Millions of us now are effectively banned from D.C.