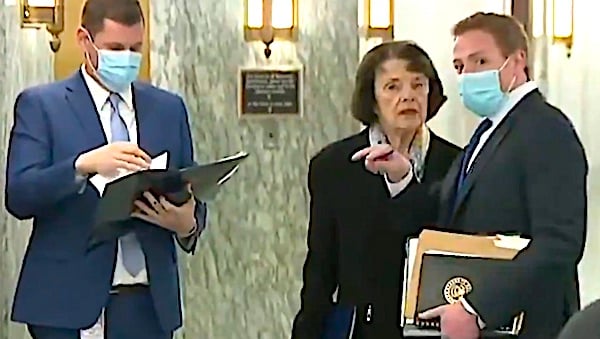 Democratic California Sen. Dianne Feinstein chatted with her aides maskless in the corridors of a government building before entering a Tuesday hearing, video showed.

The footage showed Feinstein standing outside a doorway in a building as she spoke with two men, both of whom were wearing masks. Feinstein then walks through the doorway maskless as another masked man holds the door open for her, video from The Recount shows.

The video sparked a backlash on social media as users pointed out that Feinstein has advocated for a nationwide mask mandate and attempted to prevent coronavirus funding going to states that would not adopt this mandate.

“Wearing masks in public should be mandatory,” she tweeted in July. “When the Senate takes up the next coronavirus economic relief bill later this month, I intend to offer an amendment to prohibit sending funds to states that haven’t adopted a statewide mask requirement.”

Dems constantly tiptoe around Feinstein because they want to avoid what she’s known for: harsh lectures

Yet here she is flouting all the guidelines. It’s not the first time she’s done it

I hope she’ll get a lecture from the Dems who have been rightly calling out Republicans https://t.co/K1VUOH1pLe

She explained her push for the mask mandate in a July 16 press release.

“Wearing masks in public should be mandatory,” she said in a statement. “Period. Leader McConnell said the Senate will take up the next coronavirus economic relief bill later this month. At that time, I intend to offer an amendment to prohibit sending funds to states that haven’t adopted a statewide mask requirement.”

“The situation is getting worse daily,” she continued. “Several states including California, Alabama and Montana already require masks in public. This should be universal. My hope has been that other governors would show the leadership to institute their own mask mandates, but so far that hasn’t happened. It’s time for Congress to step in. This is a matter of life or death, and partisan politics shouldn’t play a role.”

Feinstein did not immediately respond to a request for comment from the Daily Caller News Foundation. She also was spotted maskless at Dulles International Airport in September after saying that the Federal Aviation Administration should mandate masks at airports, airplanes, and on public transportation.