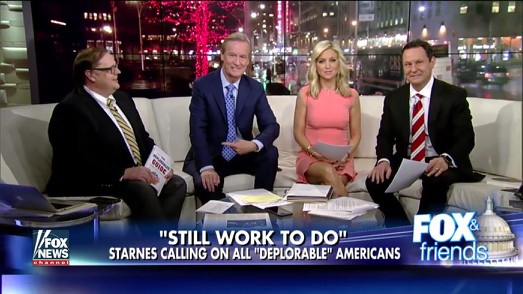 Amid a ratings slide since Election Day, the Fox News Channel's morning show "Fox & Friends" and its daytime programming lost to rival MSNBC for the first time since 2001, according to AdWeek.

The Wrap reported MSNBC also beat Fox News for the first time since 2001 in its "dayside" coverage, weekdays 9 a.m. to 4 p.m.

MSNBC averaged 1.64 million total dayside viewers to Fox News' 1.52 million, representing growth for MSNBC of 30% from the week prior to the election. The Fox News lineup slipped 33% from the final week of October 2020.

The ratings dip for Fox News began with the network calling Arizona for Joe Biden early then declaring Biden president-elect while the Trump campaign challenges the results in battleground states, contending it has a path to victory.

In primetime and in "total day" over a 24-hour period, The Wrap reported, Fox News beat MSNBC, with personalities Tucker Carlson and Sean Hannity leading the way. Carlson, Hannity and host Laura Ingraham continue to give time to the Trump campaign's election-fraud claims.

The conservative blog RedState said Republicans said have grown tired of "being lectured and insulted by some of Fox News’ anchors."

"We’ve seen it with Chris Wallace, Neil Cavuto and Sandra Smith (caught on a hot mic). More recently, we saw Leland Vittert lose his mind on a Trump surrogate," the blog said. "Republicans don’t need a news network that lies to them. They do need one that doesn’t needlessly insult them and their viewpoints."

ZeroHedge reported the "ongoing backlash against Fox News over the network's anti-Trump election coverage and never-Trump anchors (including Biden debate wingman Chris Wallace) has put the network in a viewership crisis which has not gone unnoticed by their competitors."

President Trump wrote on Twitter: "@FoxNews daytime ratings have completely collapsed. Weekend daytime even WORSE. Very sad to watch this happen, but they forgot what made them successful, what got them there. They forgot the Golden Goose. The biggest difference between the 2016 Election, and 2020, was @FoxNews!"

The antipathy toward Fox News was evident during the pro-Trump rally in Washington last Saturday.