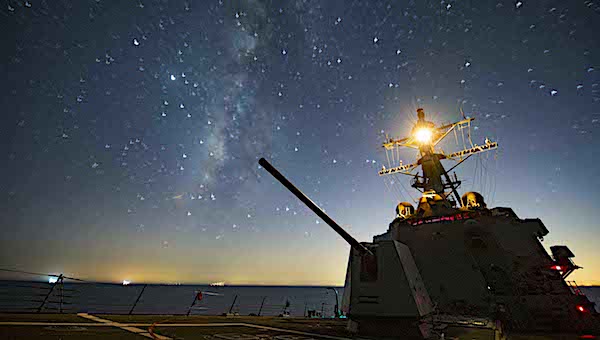 The USS Sterett steams through the night in the Gulf of Oman, Sept. 17, 2020. (U.S. Navy photo by Mass Communication Specialist Seaman Drace Wilson)

China expert Gordon Chang is warning of China's plan to become the dominant presence in space.

It's a big deal, he explained at the Gatestone Institute, becausen the "next 9/11 will almost certainly occur in space."

President Trump has created the Space Force, but Chang, author of "The Coming Collapse of China" and a senior fellow at Gatestone, noted China will be launching satellites almost every other week starting next March.

"In one instance the gap in next year's frenetic schedule of launches will be only five days," he wrote. "This year, through the end of September, China launched 29 satellites, more than any other nation. The U.S. was a close second with 27."

And, he said, the communist regime wants to "widen its lead."

One of its objectives is to get to the moon before the U.S. returns while launching satellites.

He warned the U.S. may have the "best of intentions" but lack common sense and ultimately "hand space leadership to the Chinese."

One possible failing would be to use Space Force for something other than its intended goal: fighting wars in space.

"Some believe the U.S. space program should emphasize climate change research. If there is no overall increase in space spending, there will be less money for, among other things, defending American assets in space," he said. "There are many American assets to defend. According to the Union of Concerned Scientists Satellite Database, the U.S. owned or operated 1,425 of the 2,787 satellites in orbit as of August 1."

That lead is down from before the Obama administration, which decided "it was not wise to 'militarize' space because the U.S. had so much more to lose should it trigger an arms race in the heavens."

"President Obama's view sounds smart but was deeply mistaken because, among other things, it failed to take into account the fact that Beijing was already weaponizing the high ground. 'China has been working hard to militarize space since the issuance of its '863 Program' of 1986,' Rick Fisher of the Virginia-based International Assessment and Strategy Center told Gatestone. The 863 Program was followed by 1992's 'Project 921,' run by the General Armaments Department of the Central Military Commission. After the sweeping 2015 reorganization of the Chinese military, control of space ended up in the Commission's Armaments Development Department."

The U.S. position further was hindered by the belief that the U.S. could partner with China for some projects.

That would be impractical, he said, because "in space, almost everything has a dual purpose."

For example, a Chinese laser in place to eliminate space junk could be turned on American satellites.

"Other dual use items are Russia's co-orbital 'Space Stalkers.' In peacetime, they can be used to repair satellites," he said. But they also could push U.S. satellites out of orbit.

There also was Obama's disturbing effort, he explained, to work with China on projects that would give the regime access to American technology.