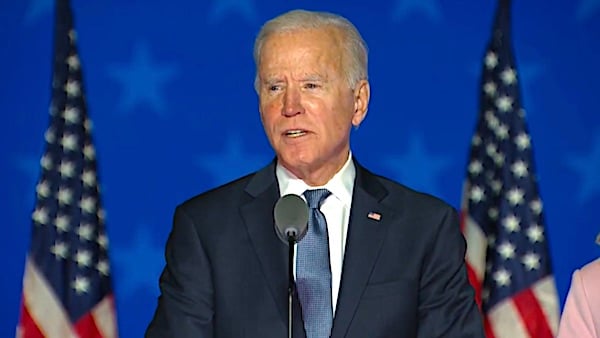 A former Obama administration official admitted in an MSNBC interview that Democratic presidential candidate Joe Biden already has been speaking with foreign leaders.

While Biden has been declared president-elect by establishment media outlets, President Trump is contesting the results in several states.

"We're going to have the pageantry already of the president-elect announcing his advisory board. He's going to start announcing cabinet secretaries," Rhodes said. "The center of political gravity in this country and the world is shifting to Joe Biden. Foreign leaders are already having phone calls with Joe Biden, talking about the agenda they're going to pursue January 20th."

Flynn resigned after one month as Trump's national security adviser and was charged with lying to FBI agents. The Department of Justice has asked the court to drop the charges, but the judge has refused.

ZeroHedge noted it was Joe Biden himself "who suggested using the Logan Act against Flynn."

The Logan Act bars unauthorized private citizens from negotiating on behalf of the U.S. government with foreign representatives.

Former Obama deputy national security adviser Ben Rhodes admitted Monday that Joe Biden is already speaking with foreign leaders as if he is the next President, a move that some believe to be a breach of the Logan Act.https://t.co/8C7ktNBQz2