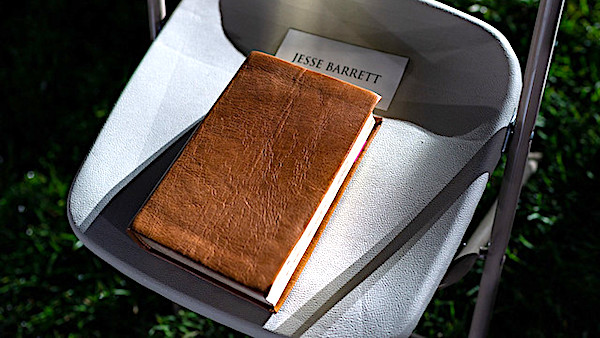 The Barrett family Bible is seen on Jesse Barrett's seat before the swearing-in ceremony of his wife, Judge Amy Coney Barrett, as Supreme Court associate justice Monday, Oct. 26, 2020, on the South Lawn of the White House. (Official White House photo by Andrea Hanks)

Rubio tweeted a video of the Georgia candidate preaching “You cannot serve God and the military” on Wednesday morning, saying, “These & even crazier things is what the radicals who control the Democratic party’s activist & small dollar donor base believe.”

Not shocked #Georgia Democrat Senate candidate Raphael Warnock said “You cannot serve God and the military” at the same time. These & even crazier things is what the radicals who control the Democratic party’s activist & small dollar donor base believepic.twitter.com/bQyBuKLwjb

Schatz replied to Rubio’s tweet, saying, “I’m not a very religious person but isn’t this from scripture?”

“Hey I just googled it and it appears to be from Matthew 6: 24,” Schatz tweeted to Rubio a few minutes later. “If you want to attack the Reverend on his policy views, fine, but this is a low blow.

The Bible verse that Schatz refers to makes no mention of the military, but instead reads: “No one can serve two masters. Either you will hate the one and love the other, or you will be devoted to the one and despise the other. You cannot serve both God and money.”

Twitter users were quick to point out that Schatz had misinterpreted the verse.

“Senator can you point out where Matthew 6:24 says ‘military?'” asked NRSC senior advisor Matt Whitlock. “If Warnock wants to substitute military service for ‘mammon’ and compare it to worldly pursuits and vices he’s free to do that. The point is that’s still an outrageous insult to those who have tried to do both.”

“If you had to Google (Warnock’s ridiculous twisting of) a very famous Bible verse, maybe don’t attempt Twitter exegesis on it,” added the Washington Examiner’s Jerry Dunleavy.

“Jesus says you cannot serve both God & Mammon,” Dunleavy continued. “Warnock is implying serving the military means you are not serving God & that you are serving Mammon. This is anti-biblical. Jesus explains how to serve God — by serving others. Military service in the U.S. is often a way to do that.”

Rubio also responded to Schatz, reminding the senator that in the Bible verse he quoted, Jesus is discouraging his followers from idolizing wealth.

“Jesus doesn’t deny our earthly needs(see Mt 6:32)but teaches dependence on the Father,” Rubio said. “Mt 6:24 warns against becoming slaves to ‘Mammon'(Aramaic for wealth). So Warnock believes the U.S. military is ‘Mammon’ & military service is incompatible with being a Christian?”