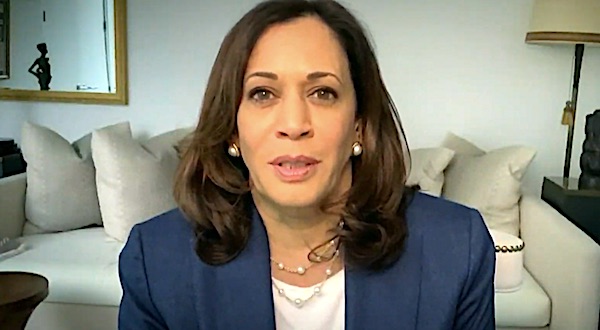 Conservative commentator Ben Shapiro said Harris is "openly making the argument that inequality of outcome is in and of itself inequity. Which is called communism."

The California senator's cartoon video features a white man and a black man gazing up at a mountain they were attempting to climb.

The men are given the same length rope, but the white man is standing by the end of his rope while the black man is at the bottom of a cliff and unable to reach his rope.

"So there's a big difference between equality and equity. Equality suggests, 'Oh, everyone should get the same amount,'" says Harris in the video.

"The problem with that, not everybody's starting out from the same place. So if we're all getting the same amount, but you started out back there and I started out over here – we could get the same amount, but you're still going to be that far back behind me. It's about giving people the resources and the support they need, so that everyone can be on equal footing, and then compete on equal footing. Equitable treatment means we all end up at the same place."

Nick Arama, in a post for the blog RedState, argued it isn't the job of the government to "give" Americans anything, "nor to ensure 'equality of result.'"

"While Biden/Harris depicts it through the lens of race, people are all different in general: some are richer, some are poorer, some are smarter, some are less so. You can’t guarantee an ‘equal starting place’ anymore than you can guarantee 'equality of result,'" Arama argued.

He noted that people from all over the world have come to America fleeing communism.

"We do not guarantee equality of result, only Communism does that, making everyone but the leaders in control equally poor and oppressed by the State," he said.

Political commentator Andrew Sullivan tweeted: "Why would a vice presidential candidate seemingly endorse full-on Marxism days before a general election? Does she believe government should enforce equality of outcome for everyone? Seriously?"

"A century of history has shown where that path leads," she wrote. We all embrace equal opportunity, but government-enforced equality of outcomes is Marxism."