“Just logged back in: I apologize for my previous subtweet of this. I was using an old 70’s-80’s technique for calling somebody a c*** without saying/writing c***, just using a sound-alike to call Trump a c***,” Olbermann tweeted.

Olbermann clarified that he was attempting to apply a derogatory term to the president.

“Deleting previous, largely because this one clarifies the c*** part,” Olbermann continued in his tweet.

Just logged back in: I apologize for my previous subtweet of this. I was using an old 70’s-80’s technique for calling somebody a c*** without writing/saying c***, just using a sound-alike to call Trump a c***

Deleting previous, largely because this one clarifies the c*** part https://t.co/hIIrt1Ke17

Olbermann previously called Trump “a whiny little Kunta Kinte,” according to a screenshot of the now-deleted tweet.

“Yes @realDonaldTrump has always been, always will be, and on the day of his bid for re-election, still is: a whiny little Kunta Kinte,” Olbermann tweeted, sharing a clip from Trump’s Tuesday appearance on “Fox and Friends.” 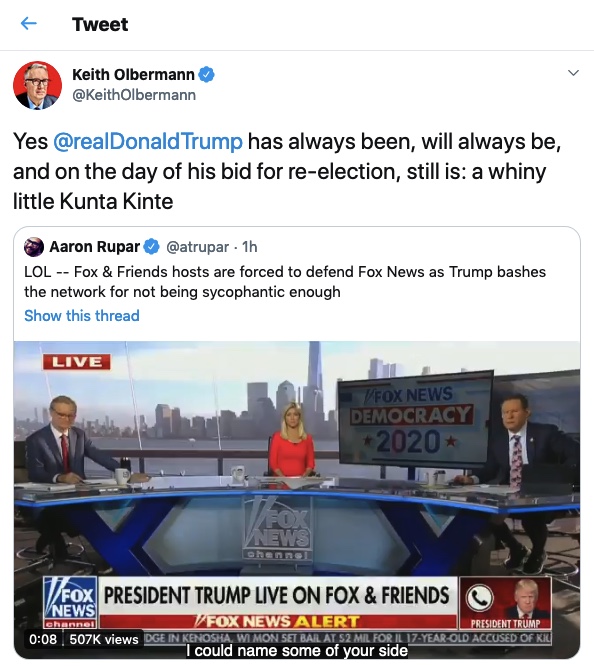 ‘What is wrong with you?’ Black Twitter drags Keith Olbermann for calling Trump a ‘whiny Kunta Kinte’ https://t.co/BvU4gg4jdo

Did he really not watch Roots or read the book? When is Kunta Kinte whiny? What am I missing?

Some users decried Olbermann’s use of the term Kunta Kinte, the name of a black slave who resists American masters in the book and TV show “Roots” as a racist remark.