CORRECTION Nov. 4, 2020: While the FBI is refusing comment on the allegations in this story, the Sunrise Movement says the claims made by ExposeSunrise.com and SunriseExposed.com are false, based on hacked and deceptively edited video to suggest leftist groups were organizing a coup against the U.S. government on Election Night. Lead Stories reported: "Sunrise, an anti-Trump climate-change movement, told Lead Stories its Zoom meetings were hacked and video was deceptively re-ordered to make it seem the movement was planning a hostile takeover should Trump win. The truth, according to a Sunrise spokesperson, is just the opposite -- what to do in nonviolent protest if Joe Biden wins and there is 'an attempt to ignore a democratic election.'" The original headline has been changed from "Leaked Zoom calls: Federal workers conspiring to shut down White House in contested election" to the updated headline, "Sunrise Movement says deceptively edited video led to claims of White House shutdown."

ORIGINAL STORY: Dozens of leaked internal documents and Zoom call video footage were made public Sunday describing plans by progressive activists and federal workers to disrupt and destabilize the outcome of Tuesday's presidential election, including plans to "shut down the White House."

"It's a coup. Don't let anyone tell you it's not," a woman states during one Zoom session.

The videos and documents, which reportedly have been handed over to law enforcement, were posted on two websites, SunriseExposed.com as well as ExposeSunrise.com, both of which promised to be regularly updated with additional content during the next 48 hours as Election Day approaches.

The information was leaked by a disaffected insider of the "Sunrise Movement," part of a loose but extremely coordinated network of left-leaning activists mobilizing across the U.S. in an effort to ferment chaos in the wake of a potential Trump victory or a contested election.

The videos and documents discuss a well-coordinated plan to shut down federal buildings (including the White House), public transportation portals, and disrupt Congress when it returns post-election. Sunrise is an umbrella movement comprised of 400 "hubs" and hundreds of affinity groups including 350.org and Extinction Rebellion.

At one point during a Zoom call that highlighted the role of the militant group "Shut Down DC," a spokesman states:

"We have been in discussion for a couple of months about how to respond to different contested election scenarios. The first step is we think we need to start the post-election phase in the streets, so we invite everyone to come to BLM (Black Lives Matter) Plaza any time after 4:00 on election night. On the 5th, we're going to shut down the White House. On the 6th, we're going to shut down larger parts of D.C., and then the following week, all the mainstream groups are going to come to D.C. and try to have a march on the 7th."

The network of progressives has enlisted several key players including Lisa Fithian, a long-time organizer and trainer including stints with Occupy Wall Street and various unions. In the video describing tools and tactics to shut down the nation's capital, she states:

"Is there going to be a war? Are people going to get killed? Like, is that on anybody else's mind? I'm guessing it is. We'e gonna see potential fighting all over the county or in some hotspots."

"Whoever's got the guns can win – let's take over the buildings! We are going to be in a crisis but we want it to be one that we are creating. We want to make sure that we are on the offense and not the defense. We want them to be responding to us and not us responding to them."

For Election Night itself, Sunrise advisers are telling its members:

"Originally we had encouraged hubs to do actions at the polls or counting centers on election night. If you're still planning on doing this, check out this guide for more info. We are discouraging hubs in swing states from election night actions because of the risk of negatively polarizing against us and causing backlash. In other places, it could still make sense to do an election night action, but we encourage you to think carefully about the tone and location of the action to avoid the right wing or media portraying us as interfering with vote counting." 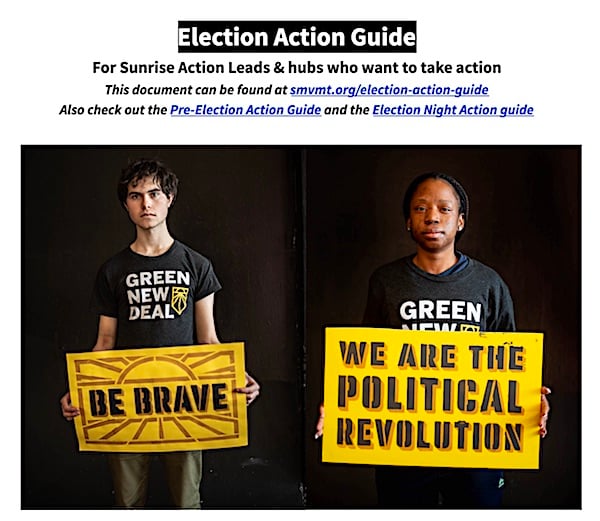 "As Sunrise, our role in this moment is to set the narrative tone early. When we mobilize early, we get the first say in the narrative and tone of the post-election period. We know that Trump, his base, and the rest of the GOP want to disrupt the ballot counting process. We will send a message to the public and the GOP that young people are calling for every vote to be counted and are committed to maintaining our democracy. If the public sees youth standing up for a fair count in a disciplined way, anyone who tries to intervene in the process will be considered a bad actor."

On Friday, journalist Millie Weaver was among the first to sound the alarm about the scheme to shut down the White House and disrupt the government, tweeting excerpts of the videos, and noting:

- They plan to shut down & take over Washington D.C. starting Nov. 4th until inauguration day to force Trump out of the White House. pic.twitter.com/AaMCKwSndk