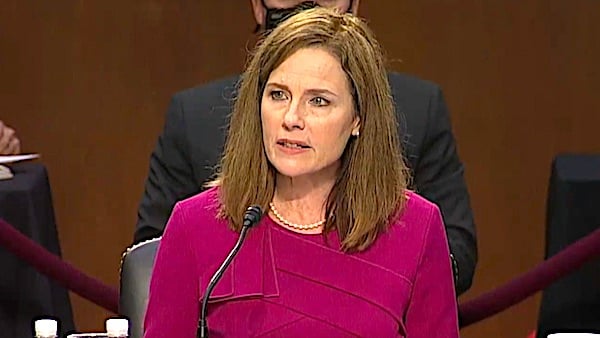 A senior Senate Democrat who apparently thought a presidential term ends after Election Day has been given a constitutional lesson by her Republican counterpart.

Sen. Dianne Feinstein, D-Calif., asked Sen. Lindsey Graham, R-S.C., in a letter to stop holding confirmation hearings for judicial nominees, insisting the "Biden-Harris administration" should be given the "opportunity to appoint judges after Inauguration Day."

Graham, the chairman of the Judiciary Committee, replied that the panel "will continue to process judges nominated by President Trump."

"We have confirmed over 220 and look forward to confirming even more," he said.

The exchange was posted online by a reporter for the Daily Beast.

As Senate GOP continues to confirm judges in the lame duck, Sen. Feinstein sends letter to Sen. Graham, urging him to "cease to process judicial nominations and allow the Biden-Harris Administration the opportunity to appoint judges after Inauguration Day"

Update here—comment from Sen. Graham's spox on the Feinstein letter:

"The Senate Judiciary Committee will continue to process judges nominated by President Trump. We have confirmed over 220 and look forward to confirming even more." https://t.co/KQIMFrUpBS

The RedState blog said the behavior of the Democrats regarding the appointment of federal judges has been "abysmal" for decades, beginning with Robert Bork and continuing with Barrett.

"It has been so bad for so many years that the Republicans finally learned to fight back during the attacks on Brett Kavanaugh during his hearing and stood their ground with Amy Coney Barrett despite the Democrats throwing a tantrum and leveling all kinds of attacks at them," the blog said.

In her letter, Feinstein argued Americans "overwhelmingly" rejected Trump, RedState noted, even though many results still are in dispute and "the election was very close."

Trump has fulfilled his promise to appoint judges who adhere closely to the original meaning of the Constitution.

Trump has appointed one-third of the Supreme Court -- Neil Gorsuch, Brett Kavanaugh and Amy Coney Barrett -- and another 200 judges, including more than 50 at the appellate level, to lifetime appointments.

It amounts to about one-quarter of the nation's entire federal judiciary. His appointment of 53 appeals court judges is more than twice what Barack Obama accomplished in eight years.

A Pew Research analysis noted appellate court jurists "have the final word on most appeals that do not end up in the Supreme Court" and "frequently end up becoming Supreme Court justices themselves."

The Financial Times observed that Trump already has impacted the judiciary for a generation or more.

"A generation of young, conservative federal judges could block laws from a future Democratic Congress," the publication said.

"When the United States Senate returned to work in early September after its summer recess, it faced a daunting in-tray. The nation’s coronavirus death toll has exceeded 1,000 people on several days this month and many of the emergency economic measures to deal with the crisis have expired. But with the parties divided over new economic stimulus, Senate Republicans have continued instead with the quiet task that has preoccupied them for much of Donald Trump’s presidency: placing young and reliably conservative judges on the federal courts. More than a dozen district judges have been installed into lifetime positions in September alone, part of Mr Trump’s near-record first-term tally of 217 judicial appointments.

"One upshot could be a scenario where a future Congress controlled by the Democrats passes legislation on climate change or healthcare, only for conservative judges to throw out those laws on the grounds of government over-reach," the analysis explained.

"The dizzying pace with which the Republican party machinery has engineered this shift — only Democratic president Jimmy Carter, under whom the courts were expanded to cope with a greater workload, beats Mr. Trump on first-term judicial appointments — has shaken liberals," the report said.