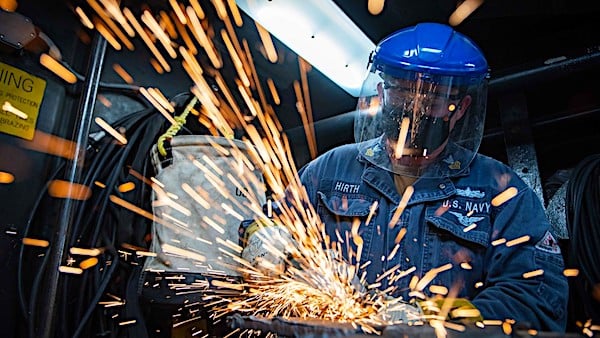 The news that the United States’ GDP grew 33% in the third quarter breathed some life into a worried nation still reeling economically and psychologically from the coronavirus pandemic and subsequent lockdowns. Americans are tired: tired of the four walls of home, tired of masks and social distancing, tired of isolation and uncertainty. We long for a return to normal. These economic numbers suggest that we’re headed in the right direction.

Such staggering growth is only possible, though, because of the economic climate created over the past four years. Low taxes and historic cuts in regulations gave businesses confidence. Multiple COVID relief and stimulus packages pumped liquidity into the markets and put cash in Americans’ hands. And though much remains to be done, and unemployment remains high at 7.9%, signs of economic hope abound.

There’s another reason our economy is rallying: energy. Abundant, reliable, inexpensive, domestic energy. It’s cheap oil that allows for delivery services to remain affordable. It’s cheap natural gas that keeps utility bills low. It’s cheap coal that powers more than 20% of the nation’s electric grid and enables all those Zoom meetings and virtual classrooms. Inexpensive energy kept the nation up and running, even when government was ordering it to shut down.

For this we should thank the millions of energy workers. They aren’t hailed as heroes or celebrated as “front line” workers – but really, is there anyone more “essential?” Doctors would be in trouble if the hospital went dark. Respirators are not plugged into good intentions. The factories making this equipment and critical PPE would be useless if their machinery didn’t turn on. I’ve had a COVID test, and every part of the process – from getting into my car to the plexiglass at the doctor’s office to the plastic device inserted up my nose to the logging on through my smart phone to check the results – was made possible by energy, and by energy workers.

“The most important election of our lifetime:” we’ve heard that message many times before. Well, as elections go, this one is pretty important. One candidate is pushing energy dominance and an economic climate of low taxes and fewer regulations. Another candidate is pushing a state-run takeover of energy, a fracking ban, a blockade of energy exploration on federal land and offshore, and a Green New Deal – well, sometimes he supports it and sometimes not – that would cost American households tens of thousands of dollars annually in perpetuity while buying “green energy” products from China.

What happens to our economy and our nation if we adopt those policies? Have we forgotten the days of $166 a barrel oil? It was only 12 years and two presidents ago. Gas prices hit an average $4.10 per gallon. In today’s dollars, that’s $4.96. For comparison, the other day I filled up my truck at $2.09 per gallon. That’s quite a difference.

If we start paying 50% or 60% more for gas, so, too, will the farmers who plant, grow, irrigate, and harvest our food. So, too, will the manufacturing plants that make our goods, the tankers and trucks that deliver them, and so on. All those costs get passed on to consumers – to us.

High oil prices also fill the coffers of countries like Iran, Russia, and Venezuela. It was not long ago that we saw videos of ISIS burning people alive in cages. It was not long ago that, flush with cash, ISIS destroyed villages and used chemical weapons. And yet, in 2020, the Middle East was barely discussed in the presidential debates. Why? Answer: energy. Domestic energy. American energy, which made us energy independent and energy dominant. President Trump’s aggressive military action destroyed the ISIS caliphate, and essential to that military victory was an energy agenda that stripped the group of its funding.

Why would Americans want to return to the failed energy and national security policies of the past?

Energy lies behind everything. You’re reading this article because of fossil fuels: electricity, plastics, mining of materials, manufacturing, powering of the Internet. The first things you did this morning involved energy: turn off the alarm, turn on the light, brew the coffee, take a hot shower.

All of that, under a Biden administration, could become three or four times as expensive. Then add a reinvigorated ISIS and a cash-rich Russia to the mix. And you thought 2020 was a bad year.

Before too much longer, America could turn a corner and return to the heady days of 2019, with low unemployment, wage growth, and economic opportunity. But we can do that only if we maintain our energy dominance and keep our energy abundant, reliable, inexpensive – and domestic.

That’s a formula for American greatness for generations to come. And it’s on the line in Tuesday’s election.