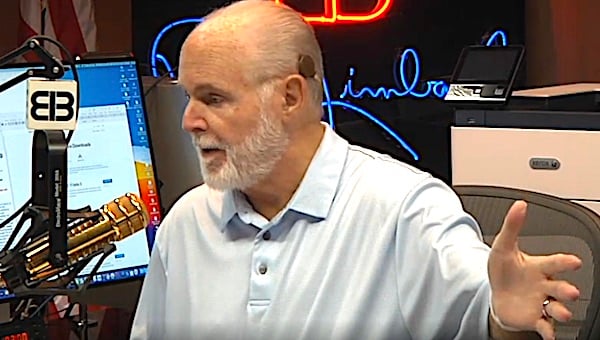 With no official winner declared in the 2020 presidential race, talk-radio star Rush Limbaugh said President Trump would, in fact, win the election when the final results are accurately sorted out.

Limbaugh, a staunch supporter of Trump and fellow resident of Palm Beach, Florida, said, "We were winning big last night. ... That's why they stopped the counting."

"Why is it that every state that is not a swing state run by Democrats can keep their act together on Election Night?" he asked rhetorically.

"The Democrats, I can't tell you how depressed they are today that Trump was not repudiated," he continued. "That's what they really wanted to happen."

He said the Democratic mantra of "Count every ballot" is not legitimate.

Limbaugh also suggested Fox News called the state of Arizona too early and mistakenly for Joe Biden as personal payback by the network after Trump had publicly criticized the network on "Fox and Friends" this week.

"It's personal. It was absolutely personal. But Trump's gonna end up winning Arizona. ...  I think he already has. It's just a matter of this playing out."

"That Arizona call, the investigation of that ... I think it's gonna reveal some fascinating things that are going on in the bowels of the decision desk at the Fox News Channel."

He called the outcome of huge support for the president "a devastating night" for Democrats.

Limbaugh said he talked with White House officials who say anywhere from two-thirds to 70 percent of Arizona votes are coming to the president, meaning that state could be counted in Trump's favor.

Limbaugh urged his listeners: "The American way of life is going to be preserved. Keep the faith. The best days of our country are still ahead of us."

"We want love and peace in our lives. We want our lives to be pleasant."