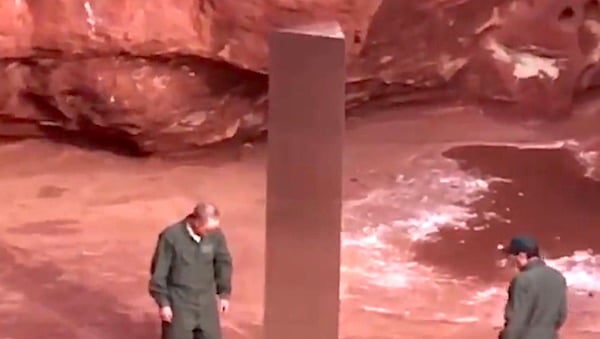 The structure, discovered last week by a team surveying the area for bighorn sheep, was removed “by an unknown party,” the federal Bureau of Land Management’s Utah office said in a statement.

The bureau also said that they were not the ones who removed the monolith, which it considers “private property,” and that it would not be investigating its removal.

“The BLM did not remove the structure which is considered private property. We do not investigate crimes involving private property which are handled by the local sheriff’s office,” the bureau said.

A team of public safety officers discovered a mysterious monolith in a remote part of Utah – and said they have no idea who put it there https://t.co/zJ959qzpSW pic.twitter.com/5ubrSvcoLy

The monolith was about 12 feet tall and was embedded in the ground, officials said. The Utah Department of Public Safety said the surveyors found the “unusual object” in southeastern Utah.

“The crew said there was no obvious indication of who might have put the monolith there,” the department’s statement said.

Bret Hutchings, the helicopter pilot with the surveying team, told Utah outlet KSL-TV that they “were kind of joking” as they approached the object.

“If one of us suddenly disappears, then I guess the rest of us just make a run for it,” he said.