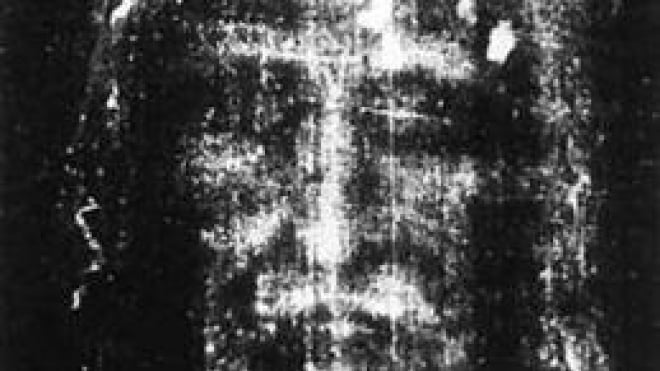 A new book by a researcher who has spent more than four decades studying the Shroud of Turin says a 1988 test concluding the linen cloth with the image of a tortured man dates back only to the medieval era was faulty.

In "The 1988 C-14 Dating of the Shroud of Turin: A Stunning Exposé," Joseph Marino contends carbon-14 dating picked up material that was used to repair the shroud after a fire in the 16th century.

The linen cloth is considered by many to be the shroud of Jesus Christ following his crucifixion. Proponents argue the image was embedded into the fibers by a process that has not yet been explained, possibly a surge of energy. It is a negative image, such as that created during the photography process using film.

Matthew 27:57-60 records: "When the even was come, there came a rich man of Arimathaea, named Joseph, who also himself was Jesus' disciple: He went to Pilate, and begged the body of Jesus. Then Pilate commanded the body to be delivered. And when Joseph had taken the body, he wrapped it in a clean linen cloth, And laid it in his own new tomb, which he had hewn out in the rock: and he rolled a great stone to the door of the sepulchre, and departed."

The shroud is a sepia-colored, rectangular, 14.3 by 3.7-foot linen cloth woven in a three-to-one herringbone twill composed of flax fibrils with the front and the back image of a naked man with his hands folded across his groin.

Marino points out the shroud is known to have undergone several repairs during its history, including after a fire in 1532.

About that time, it was owned by Margaret of Austria, duchess of Savoy, and her weavers were expert in the technique known as 'French invisible reweaving."

Marino tracked down, along with his late wife Sue Benford, anomalies in the weave pattern in the sample of the material that had been carbon-dated to have orginated in about A.D. 1260 to 1390 by Oxford, the University of Arizona and the Swiss Federal Institute of Technology in Zurich.

The conclusion of many was it was nothing more than a medieval forgery.

Marino researched the possibility that the C-14 dating had been done on a portion of the material that had been repaired, not a sample from the original.

A chemist who previously was involved in shroud research, Raymond Rogers of the Shroud of Turin Research Project, described such ideas as coming from the "lunatic fringe."

Rogers argues the C-14 fibers were not "representative of the main cloth, thus invalidating the results."

His analysis ultimately found that the tests done on the shroud "sample" was a combination of first century and 16th century fibers.

Marino said his book points to irrefutable proof that politics – along with personal agendas – was behind the C-14 dating of the shroud.

"We can continue to hope that the Catholic Church will in the near future allow some new testing, so that we can learn all we can about this enigmatic cloth and the person who was wrapped in it," he said.

Rod Dreher at the American Conservative cited a video in which scientists claimed "that their study has shown that the image on the shroud is not static, but actually depicts a slight oscillation."

"It is, they say, like (a) stroboscopic photograph, showing slight movement of the figure as intense bursts of energy emanate from his body."

The scientists use photogrammetry, "the science of making distance measurements of surfaces depicted on photographs."

Dreher explained the movement is slight but apparent.

"If the image really is Jesus of Nazareth at the moment of Resurrection, then the first thing Jesus did with his hand after returning to life was to make the hand configuration very similar to that Orthodox priests use when they bless — a hand position of great antiquity, derived in part from Greco-Roman hand gestures signifying particular meaning," wrote Dreher.

WND also reported on the shroud when Professor Giulio Fanti of Italy's University of Padua created a 3D model of the image. He concluded: "Therefore, we believe that we finally have the precise image of what Jesus looked like on this earth. From now on, He may no longer be depicted without taking this work into account."

Also, researchers from the Institute of Crystallography found chemicals in the stains on the Shroud indicating the stains were blood. Researchers also learned that the blood belonged to someone who suffered from extreme injury and pain.

"The blood serum tells us that before dying the person was suffering," said Elvio Carlino, a researcher from the Institute of Crystallography. "This means that the Turin Shroud is not fake. ... It is certainly the funeral fabric that wrapped a tortured man."

Rogers, a chemist with the Los Alamos Scientific Laboratory and a member of the 1978 Shroud of Turin Research Project, found in his study that after a fire in 1532 nearly destroyed the shroud, French Poor Clare nuns repaired it by adding 16 burn patches. The nuns stitched a reinforcing cloth to the back of the shroud that is known as the Holland cloth.

The nuns were able to repair the edges of the shroud by expertly reweaving with cotton much of the damage the fire did to the original linen cloth.

Rogers was able to detect under a microscope the reweaving, because the cotton had been dyed to match the linen. The fibers could be distinguished in the reweaving at the edges of the shroud, because linen is resistant to dye, while cotton is not.

Rogers' paper made an impact on the Shroud of Turin research community worldwide, because immediately after the results of the 1988 radiocarbon dating were made public, he was a leading voice asserting the shroud was a medieval forgery.

And WND reported 10 years ago that a study from the Italian Society of Statistics found problems with the claim it was a medieval forgery.

The article from three Italian university-based statisticians and a professor of statistics from the London School of Economics was published in Italian in the magazine of the Italian Statistical Society.

They explained at the time that the 1988 radiocarbon tests failed to take into consideration pollution on the shroud, both from plant life from the many locations it had traveled and from centuries of contact with human hands. They point out that even Nobel Prize chemist Willard Frank Libby, the creator of the carbon-14 dating method, had warned such factors could contaminate the results.