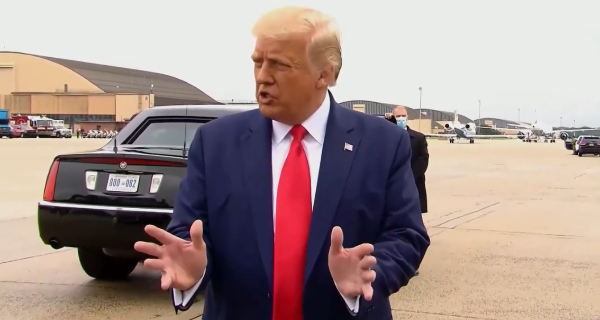 President Trump speaks to reporters at Andrews Air Force base before traveling to Kenosha, Wisconsin, in Sept. 1, 2020 (Video screenshot)

A lawsuit filed in Wisconsin charging that hundreds of ballot drop boxes were not authorized by law is asking that the ballots to be "set aside."

Karen Mueller and the Amos Center for Justice and Liberty of Chippewa Falls filed the complaint on behalf of Dean W. Mueller against Wisconsin election commissioners and others.

Mueller alleges his fundamental right "to vote and to have a safe, free, secure and transparent election was compromised and tainted by the illegal actions of the respondents in that the Wisconsin Election Commission communicated illegal interpretations of existing Wisconsin Elections Laws or non-existent laws to county clerks."

They relied on the WEC for accurate information and acted on it. Because of that "illegal advice," county clerks used more than 500 ballot drop boxes during the election.

The complaint requests a ruling that the boxes are not allowed under state law.

The case is urgent, the complaint states, because of the Dec. 14 Electoral College vote.

"If as a matter of law, the ballots deposited into these drop boxes are determined to be illegal by this Wisconsin Supreme Court, then by law is the remedy to remove the illegally cast ballots from the respective candidates' total vote counts since illegally cast votes dilute legal votes which thereby disenfranchise legal voters?" the complaint argues.

If identifying the ballots cannot be done, then should the election results be "set aside" and a new election held, or should the state legislature choose the electors?

The complaint charges that the Wisconsin Election Commission, without the authority to enact laws, invited state election managers to "install either permanent or temporary absentee ballot 'drop-boxes' for the upcoming" election.

That action "created a new process and procedure for casting a ballot in Wisconsin" that was never approved by the legislature.

"By leaving election officials in all Wisconsin counties the impression that the use of ballot drop boxes was legal, members of the WEC violated Wisconsin elections laws and encouraged county clerks to do so, also," the complaint says.

The lawsuit contends the case is more complicated than simply using an unauthorized procedure for ballots.

"Under the apparent guise of protecting our country from a foreign threat of election interference, unknown government actors within CISA in working with these other organizations, did in fact interfere in the election laws of Wisconsin," the complaint charges.

The head of CISA, Chris Krebs, after insisting there was no evidence of vote fraud in the 2020 election, was fired by President Trump.

Then there was the funding by the private Center for Tech and Civil Life of election processes in five key Wisconsin cities in the amount of $6.3 million.

"There is now a cloud of suspicion over the whole election process in Wisconsin," the filing states.