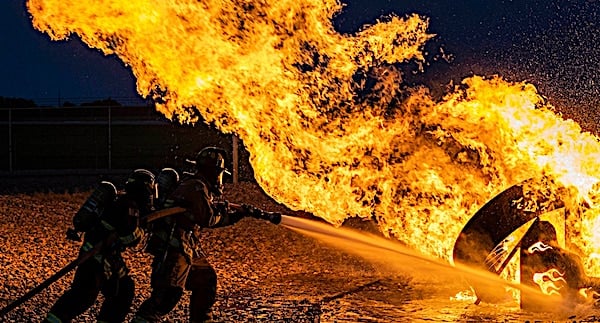 Religious leaders urged Americans to peacefully accept the results of the 2020 presidential election as cities board up businesses, homes, and religious institutions in anticipation of violent riots.

“It does not benefit our nation, doesn’t benefit black people or white people, Democrats, or Republicans, for Washington, D.C. to go up in flames,” Pastor James Ward told the Daily Caller News Foundation.

Ward and his wife and fellow pastor Sharon Ward held a live-streamed service at the Museum of the Bible in D.C. Monday morning to pray for peace and healing in the United States. The black pastor told the DCNF: “It’s not a political issue at all, it’s a spiritual issue that is affecting our nation.”

Police in major cities across the nation, including Washington, D.C., New York City, and Los Angeles, are prepping for expected election violence, the New York Times reported Sunday. This looming violence would follow riots and looting throughout the country through the coronavirus pandemic.

The DCNF reached out to many religious leaders for advice and perspective on this potential election violence. Several declined to comment, such as New York-based Rabbi Angela Warnick Buchdahl and retired Philadelphia Archbishop Charles Joseph Chaput.

Many communities that were forced to grapple with violence during previous protests and riots are now bracing for violence once again. Crown Heights, New York-based Rabbi Yaacov Vehrman the DCNF, “We’re working with local leaders of all the communities in Crown Heights, black and Jewish leaders, other leaders, and we are all on the same page.”

“We do not want violence,” he added, emphasizing that the New York City Police Department is taking threats of election violence “very seriously.”

“If there is violence, we are in touch with law enforcement and we trust NYPD, that they are going to be able to protect the community,” Vehrman told the DCNF. “But we are suggesting the doors of the synagogues remain locked, that people are extra alert, and just follow the news.”

“I’ll say furthermore, that I think there’s this perception that all Orthodox Jews are voting for a particular candidate,” Vehrman added. “So I think that because of that, if the president wins reelection, there is a fear that there’ll be violence directed at the Orthodox Jewish community. And we hope that it’s not the not going to be the case.”

Some religious leaders pushed back on discussing election violence. “Violence after the election is not something we are expecting,” Fr. Edwin Dwyer, the pastor of a small parish in rural Michigan, told the DCNF. “But if one were to ask me, I’d reply in the words of Jesus, ‘Be as gentle as doves, and as cunning as serpents.'”

“We can’t speculate on what may happen this week,” Jehovah’s Witnesses United States Branch spokesman Robert J. Hendriks III told the DCNF. “However, Jehovah’s Witnesses have always campaigned for God’s kingdom. This singular focus unifies them as a global spiritual family.”

Other religious leaders suggested that the rioting is politically motivated.

Former Pro-Life Voices for Trump co-chair and Priests for Life national director Fr. Frank Pavone said that those on the left have attempted “a coup” over the last four years against President Trump and “incited distrust of the Electoral college itself and threatened various power grabs through such things as packing the Supreme Court.”

“This is the kind of thing that has to be addressed,” the Catholic priest told the DCNF. “The best way to avoid physical violence, which leaders on both sides of our political divide strongly oppose, is to avoid the non-physical violence embedded in the failure of the Left to accept the results of the 2016 elections.”

“The refusal to accept those results was also seen in the way the Left treated the nomination and confirmation of Justice Brett Kavanaugh. The process is capable of handling severe disagreements peacefully, but they did not respect the process,” he continued.

Monsignor Anthony Figueiredo, the former secretary to disgraced Cardinal Theodore McCarrick, warned the DCNF that impending election violence will “not be an expression of political frustration by the masses.”

“Rather, a handful of independently acting radicals/anarchists and opportunists will vandalize and loot in urban centers ‘to spread despair and discouragement,’ in the futile attempt ‘to dominate and gain control … even under the guise of defending certain values,'” Figueiredo told the DCNF, quoting Pope Francis’s September encyclical.

Figueiredo, who made headlines in 2019 by releasing letters suggesting Vatican officials might have been aware of claims concerning McCarrick’s misconduct, encouraged magnanimity from the winning side and dignified disappointment from the losing side.

“Consider: No matter who wins – whether immediately or after drawn-out controversy – America, for all its faults, contributes something beautiful to the world,” the priest added. “To continue to do this, Americans must learn to live together in peace. With heroic humility, they must rebuild the bridges that have been burned.”