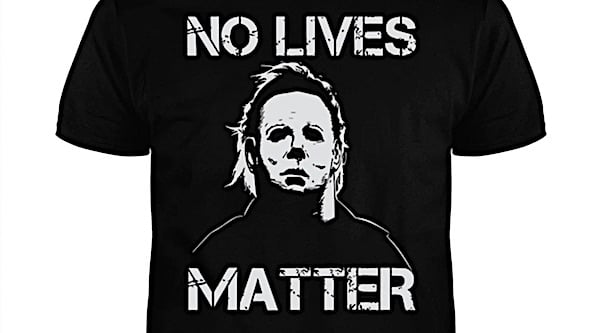 The shirts also featured the horror movie characters Jason Voorhees, from the movie “Friday the 13th,” and Michael Myers from “Halloween,” according to Syracuse.com. The human resources department at the school district is conducting an investigation.

“We are aware of the recent post on social media. The two employees have been placed on administrative leave pending an investigation by our Human Resources Department,” a district statement to CNY Central said, according to CNY Central. “We believe Black Lives Matter in the Syracuse City School District. The ‘costumes’ are racist, insulting and offensive and not consistent with our core beliefs and values.”

Two Syracuse school employees have been put on leave after photos on Facebook showed them in the classroom wearing shirts with the phrase “No Lives Matter” with photos of fictional serial killers Michael Myers and Jason underneath.https://t.co/cDxSEa0Bjf

“We hold our employees to a higher standard and expect them to model appropriate behavior for our students,” the statement continued, according to CNY Central.

The employees were put on leave after the pictures, which also showed them wearing the t-shirts in a classroom, were spotted on Facebook, CNY Central reported. The district didn’t elaborate on the time and date the employees wore the t-shirts, who they are and at what school they are employed at, Syracuse.com reported.

The Syracuse City School District did not immediately respond to the Daily Caller News Foundation’s requests for comment.