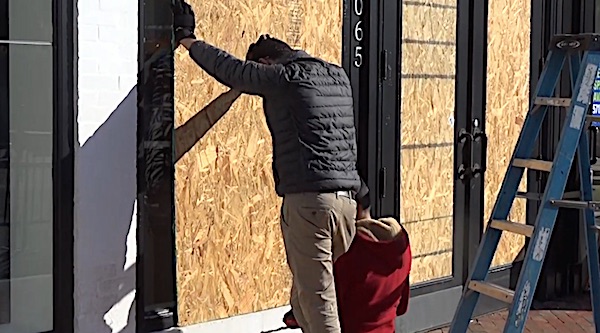 Business owners in Washington, D.C., board up to guard against potential post-election riots, (Video screenshot)

Business owners boarding up store windows in Washington, D.C, told the Daily Caller News Foundation that they are expecting people to loot and riot if President Donald Trump wins reelection.

One female owner said she is boarding up in anticipation of what might happen if she leaves her business unprotected, referencing riots and unrest that have occurred throughout the summer.

She said that her business had to lock up during riots over the summer and expects similar demonstrations as “when we had the Black Lives Matter rallies.”

A male business owner told the DCNF, “We boarded up early and are preparing for chaos pretty much.”

He added, “If Biden wins I think it will be a little bit more peaceful, but I think that there’s certain groups that might come out and — people always talk about like civil war and things like that.”

He said that he expects demonstration activity to last for at least a couple of days, “but you never know, people take advantage.”

“We’re not stupid. So, I think it’s going to be bad, all the street closures, we’re staying away from here probably for a few days and then come back and see how it goes.”

Another business owner speculated that people will be angry and demand recounts if Trump wins, though if he loses people will be “happy about it and I think they’d move on.”

“I think it’ll be a lot of people calling for some kind of recounts or revotes … just some kind of way to see if like he had to have cheated … or something, so I think people will take to the street and they’ll be upset obviously,” he said.

The business owners hoped they would be able to reopen this week, though they’re unsure what the conditions will allow for.

Content created by The Daily Caller News Foundation is available without chargolbere to any eligible news publisher that can provide a large audience. For licensing opportunities of our original content, please contact [email protected]