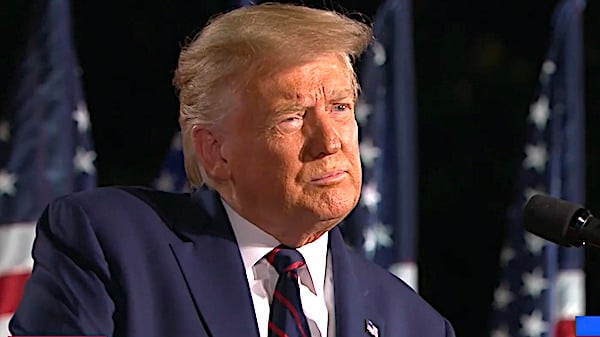 People were injured and property was damaged Election Night as members of the "Resistance" to President Trump took to the streets across the nation.

The toll was not as high as had been feared amid reports of stockpiles of bricks being found in downtown areas in several major cities, including Denver.

But it was not a peaceful night.

Fox News reported protesters in Raleigh, North Carolina, were caught throwing fireworks and other objects during an election night "demonstration."

Six were arrested on charges of failure to disperse, assault, resistant, obstruction and disorderly conduct.

There was similar civil "unrest," as AP advised reporters to describe riots, in Los Angeles, Seattle, Washington and Minneapolis.

In Washington, D.C., the Washington Examiner reported, the head of the Proud Boys organization was stabbed, along with three others, only blocks from the White House.

One of the victims was Trump supporter Bevelyn Beatty.

"Video recorded by the Proud Boys shows three people ambushed the group around 2:30 a.m. ET at 14th Street and New York Avenue NW. At least one person stabbed the group's members, who were huddled together as they tried to fight off the attackers. Proud Boys Chairman Enrique Tarrio, who was stabbed in the stomach, told the Gateway Pundit that they had been walking home after watching election results come in at a nearby bar," the report said.

"Beatty, known for pouring paint over a Black Lives Matter mural outside Trump Tower in New York City, said she was stabbed in the lower back where her shirt was bloody," the report said.

Metropolitan Police officials were searching for two black men in all black clothing and a black female in black sweatpants.

The piles of bricks had been reported in Kansas City; Denver; Chicago; Lansing, Michigan; and other cities

One pile was seen in Chicago.

And more were found in Denver, where summer riots left at least one man dead.

In Seattle, a mob was found parading through the city streets, and eight were arrested.

Among other things, mob members put nails in the middle of roads and blocked traffic.

Two marches are currently moving through the S. Lake Union and Capitol Hill areas. One from Cascade Park--south on Fairview/Harrison--while another is leaving Cal Anderson Park, headed west on Denny and Summit. Please use caution if travelling in these areas.

Police had cautioned the public about traveling near the mobs.

In Portland, Oregon, rioters smashed windows at a college and tried to burn down a building.

The Multnomah County Sheriff's Office said after windows were broken at several buildings on the Portland State University campus that a Starbucks was broken into and a flammable liquid dumped there.

The Daily Caller reported Kaiave James Douvia, 22, was arrested for criminal mischief, burglary and disorderly conduct along with Connor Austin, 25, who was booked for interfering with a peace officer.

Unified Command: To those gathered near PSU, this has been declared an unlawful assembly. Disperse to the south or west.

Failure to adhere to this order may subject you to arrest, citation, or crowd control agents, including, but not limited to, tear gas and/or impact weapons.

Paul Bedard's "Washington Secrets" column at the Examiner pointed out that internet inquiries for homes with "bunkers" spiked 546%.

"The real estate site ISoldMyHouse.com told Secrets that the election jumped searches for bunkers 300%, but that nearly doubled on Election Day," he explained. "In the last 24 hours, searches for houses with 'emergency spaces' such as bunkers, panic rooms, and hidden fortified rooms have increased 546%, as America waits for all votes to be counted, and the election result is confirmed."

Gun sales in recent weeks also have been setting records, with some retail outlets sold out of inventory.

"From our data, it seems what people really want are fortified basements, panic rooms, or bunkers within the grounds of their house. It’s not just private homes being sought after to keep people safe either. Companies are opening survival camps on election day," said Kris Lippi, the owner of ISoldMyHouse.com.