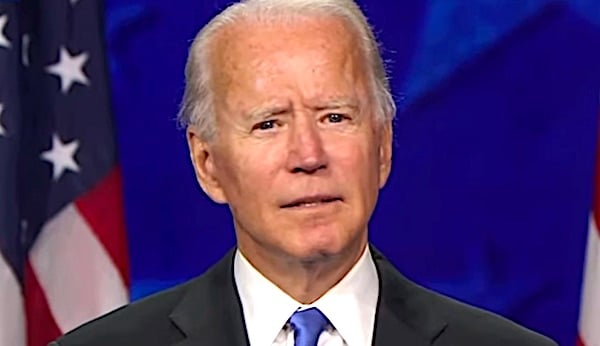 Democratic House Speaker Nancy Pelosi claimed when news networks declared Joe Biden the winner of the 2020 presidential race that he now has a "mandate for action."

However, aside from the fact that President Trump is challenging the results, alleging vote fraud, the claim of a Biden "mandate" is questionable, a new poll indicates.

Only 56% of Biden's voters said they were voting for him, while 29% said they voted against Trump and another 15% were "unsure" why they voted for the Democrat, according to a Rasmussen poll reported by Paul Bedard in his "Washington Secrets" column for the Washington Examiner.

"Looking back at the presidential election, Trump voters overwhelmingly say they voted for the president, while a sizable number of Biden supporters admit they were voting against Trump rather than for the former vice president," Bedard said.

Among Trump voters, 90% say they voted for the president, while just 8% say they were voting against Biden.

Bedard said the "Trump-hate" was part of a "lingering hangover from Trump's surprise 2016 victory."

The buyer's remorse among Biden voters already has become evident.

Noted feminist Naomi Wolf wrote on Twitter: "If I'd known Biden was open to 'lockdowns' as he now states, which is something historically unprecedented in any pandemic, and a terrifying practice, one that won't ever end because elites love it, I would never have voted for him."

If I’d known Biden was open to ‘lockdowns’ as he now states, which is something historically unprecedented in any pandemic, and a terrifying practice, one that won’t ever end because elites love it, I would never have voted for him.

Further remorse was documented in a survey commissioned by the Media Research Center that revealed more than a third of voters who chose Joe Biden were not aware of evidence linking him to corrupt financial dealings with China, through his son Hunter.

Had they known, the survey found, President Trump would have won at least 289 Electoral College votes.

After the new evidence in the Hunter Biden scandal was reported, a Google search trended for "Can I change my vote?"

Strongly Trending (Google) since immediately after the second debate is CAN I CHANGE MY VOTE? This refers changing it to me. The answer in most states is YES. Go do it. Most important Election of your life!

Some states do allow vote changes.

Talk-radio host Rush Limbaugh lamented the fact that so many already had voted, noting influential developments in an election often don't occur until late in the campaign.

He said some assume the millions who voted early just couldn't wait to express their hatred of President Trump.

"I’ve been asking myself, why is that the conventional wisdom? Why couldn’t it just as easily be that there are gazillions of Trump people who are fed up and have been fed up for four years over the abject attempt to assassinate him? They ran a coup operation which is part of a smaller subset the overall political assassination they have attempted against Donald Trump for the past four years and even five, if you want to include 2016, the campaign year. It has been a veritable political assassination attempt," Limbaugh said.

"Why couldn’t it just as easily be a bunch of Trump supporters who are livid at that and who don’t want to wait ’til Election Day, want to get out there to vote to affirm their support for the guy?"