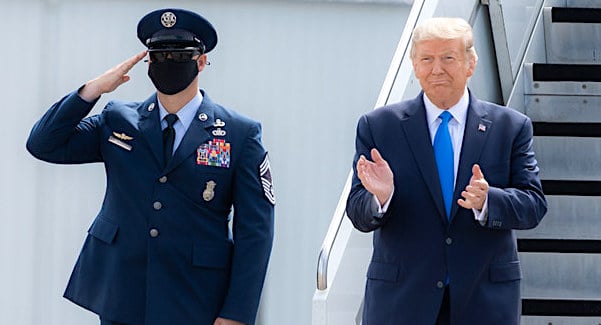 A pollster who correctly predicted Donald Trump's victory in 2016, says 20-25% of blacks in battleground states will vote for the president, which is enough to "tip the scales" in his favor.

"It's a significant move in this vote," said Robert Cahaly in an interview Monday with Fox Business host Maria Baritromo. "And everytime a black leader comes forward and says they’re with Trump, it makes people actually less shy about declaring they’re for Trump."

He was referring to the "shy" Trump voters who keep their choice quiet to avoid backlash from their peers or community.

Cahaly, who specializes in trying to measure the shy vote, said many independents haven't voted yet, and are "still weighing the candidates."

He noted that most polls show the economy is the No. 1 issue, and working class, hourly-wage workers and college students who don't want another shutdown are moving late in the campaign to Trump.

Last Thursday, a Rasmussen poll found 31% of likely black voters said that if the election were held today, they would vote for President Trump. Other polls indicated closer to 20% of blacks will vote for Trump. A Los Angeles Times poll Thursday had it at 14.6%.

Do you see a massive shift among black Americans toward President Trump?
95% (40 Votes)
5% (2 Votes)

Trump received only 8% of the black vote in 2016, and political analysts have said that if that figure were to double, it could tip the election in his favor.

Cahaly said the vote for Trump among blacks, according to his polling, ranges from 9% to more than 30% in states with a large black population. While mass media polls show Trump with 29% support among Latinos, Cahaly said his polling shows the president in a range of 35% to 50% from state to state.

Republican U.S. Senate candidate John James, who has mounted a serious challenge to Democratic incumbent Sen. Gary Peters in Michigan, made the case for black voters supporting Trump in a campaign video.

James said the Democrats' model is "reliant on keeping blacks dependent on the government."

Nothing has changed under Democratic Party leadership in cities with large black populations for 50 years, he said.

"The Democratic Party leadership cares more about the black vote than the black people," he said, "and it's time to wake up."

I was raised by 2 Democrats from the Jim Crow south who taught me that “if God ain’t in it, he ain’t on it.” It’s time to wake up. Neither party is perfect, but neither party will get better if they don’t have to earn our votes and reflect our values. pic.twitter.com/79YZmqGfp7

A black man, Davis told the crowd at the Flint airport Wednesday, "I'm not an Uncle Tom."

"This is not a game, folks. President Trump, Vice President Pence — God uses whoever he wants to bring his people out of whatever the problem happens to be," he said.

"Right now, the narrative has been spent — President Trump is full of hate. Let me tell you something, the Democrats are full of hate. I'm tired, I've been a Democrat, I am a Democrat, all my life, 64 years," said Davis, the vice president of the city council.

"Last four years I voted for Hillary Clinton. This year I decided to go with President Trump. I'm not a bootlicker, I'm not an Uncle Tom," he said.

Trump has been endorsed by other black Democratic lawmakers, including Georgia state Rep. Vernon Jones, who was one of many black speakers at the Republican National Convention in August.

The speakers apparently posed such a challenge to the Democrats' "lock" on the black vote that "Uncle Tom" hashtags trended on Twitter, and a Georgia pastor called the speakers Trump's "slaves."

But the speakers recounted Trump's accomplishments for the black community, including the lowest unemployment rate ever, the prison and criminal sentence-reforming First Step Act, the "opportunity zones" that incentivize investment in poor areas, permanent funding for historically black colleges and universities, and promoting school choice.