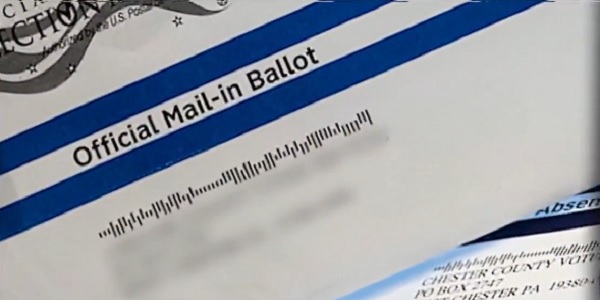 A U.S. Postal Service carrier was caught allegedly trying to cross the Canadian border with undelivered mail, including several absentee ballots, according to the Buffalo News.

Brandon Wilson was stopped while crossing Peace Bridge from New York into Canada at around 7:30 p.m. Tuesday, the Buffalo News reported.

Border agents found over 800 pieces of mail that had failed to be delivered in the trunk of Wilson’s car while conducting a routine vehicle search, according to the Department of Justice. There were three absentee ballots found in the mail bin, federal authorities reported.

Among the mail found in Wilson’s truck were three absentee ballots, 106 political, 220 first-class, and 484 standard pieces of mail, according to the Buffalo News. The mail was sent between Sept. 16 and Oct. 26, according to NBC News.

Wilson told border agents that he did not intend to attempt to cross into Canada, but ended up in the wrong lane on I-190, leading him to accidentally end up at the Peace Bridge Port of Entry, per the Buffalo News.

When Customs and Border Protection agents questioned him about the undelivered mail, Wilson stated it was not undelivered, but rather belonged to himself and his mother, according to The Buffalo News. He failed to explain why he was in possession of mail addressed to other people, The Buffalo News reported. Wilson denied knowledge of the absentee ballots being among the mail in his trunk, per the Buffalo News.

Wilson was arrested and has been “charged by criminal complaint with delay or destruction of mail,” according to the Justice Department. He is to appear in court on Nov. 11, according to the Buffalo News.

The mail was retrieved by the United States Postal Service Office of Inspector General, the Justice Department said.

“This office is committed not only to ensuring the integrity of the mails, but also of individuals’ rights to vote in a free and fair election. The criminal conduct with which this defendant is alleged to have engaged undermined both of these interests,” U.S. Attorney James P. Kennedy Jr. said, according to the Buffalo News.