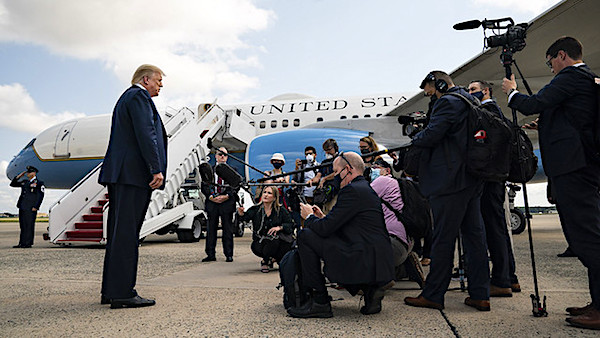 President Donald J. Trump speaks with reporters Tuesday, Sept. 8, 2020, at Joint Base Andrews, Maryland, prior to boarding Air Force One for his trip to Florida. (Official White House photo by Joyce N. Boghosian)

When my liberal friends share their apocalyptic fears about right-wing brown shirts, I say, “I’ve never encountered one of those people; have you?” The answer is always no.

If the patio isn’t a tinderbox, I’ll then ask if they ever worry that something they or their children might say could spark a catastrophic blowback. Most reply yes.

But when I inquire whether they believe such punitive retribution at work, at school or on social media would come from the right or the left, they usually fall silent.

To state the obvious, the censorship now prevalent on campus and the corporate office, the cancel culture and Twitter mobs that have cost scores of people their jobs, and the violence of antifa, are a specialty of the left.

So, too, is the latest wrinkle: the McCarthyite blacklists that have mushroomed since Election Day. Backed by Democrat leaders such as Rep. Alexandria Ocasio-Cortez and their media allies, the Trump Accountability Project seeks “to make sure those members of the Trump administration responsible for loosening the guardrails of our democracy are not rewarded with book deals, TV contracts, or six-figure salaries in the private sector based on that experience.”

Some students at Harvard, supported by the union that represents the university’s graduate students, have written an open letter demanding the creation of “a system of accountability for high-level political appointees and Trump administration consultants before they are invited as fellows or to teach or speak on campus.”

Trump officials aren’t the only ones caught in the career-ending crosshairs – and the threats are not just coming from partisan Democrats but from journalists, too. As many Republicans questioned the election results, CNN’s Jake Tapper tweeted that they should “think not only about what’s best for the nation (peaceful transfer of power) but how any future employers might see your character defined during adversity.”

In a post-election pitch for new subscribers, the New Republic argued that people should stop wasting their time talking with “jackasses” who supported a “racist, misogynistic, narcissistic” president and read its morally infallible writers instead. “Under normal circumstances, we agree to disagree, accept that our friends and colleagues are honorable even when we don’t accept their ideas,” the letter read. “But these are not normal times.”

Given this eliminationist attitude, it’s no surprise that the headline of a recent Washington Post article reported: “Fox News veterans face a hurdle in the job market: Having Fox on the résumé.”

The Post article echoed other evidence that prestigious media outlets – which have traditionally acted as brakes on illiberal tendencies, especially regarding free speech – have become enforcers of leftwing orthodoxy that is linked to the brutalist practice of silencing, canceling and exiling. In her resignation letter from The New York Times this summer, conservative columnist Bari Weiss observed that “a new consensus has emerged in the press, but perhaps especially at this paper: that truth isn’t a process of collective discovery, but an orthodoxy already known to an enlightened few whose job is to inform everyone else.”

Her take was confirmed in a reported piece on the Times’ newsroom culture by Reeves Wiedeman. It documented a brewing civil war at the Gray Lady between older, more traditional journalists and younger “insurrectionists” – as well as increasingly left-leaning readership that pays the bills – who believe the paper’s coverage should not describe the world as it is but as it should be, according to the moral certitudes of the social justice intelligentsia. (The Wall Street Journal reported that a similar dynamic is occurring at Spotify, where some employees are up in arms because Joe Rogan’s popular podcast airs views they find distasteful.)

Note the irony that Wiedeman’s article ran in New York Magazine just weeks after columnist and relentless anti-woke scourge Andrew Sullivan, a pioneer of the gay marriage movement, resigned from the publication because he said progressive staffers felt threatened by him, ostensibly because he refused to disavow a controversial issue of the New Republic on race and IQ that he had edited back in 1994.

The legions of moderate liberals troubled by all this tend to offer two arguments to downplay the threat. Echoing their favorite “conservative” columnist, David Brooks, they say the right is ginning up hysteria over the isolated actions of a tiny fringe, “a few extremists in Portland” and “the leftist illiberals on campus.”

Other moderates, who admit that position is hard to reconcile with the mountains of contrary evidence, cast the rise of the illiberal left as a temporary response to Trumpism that will dissipate once the pestilential orange boil has been lanced.

Both views are naive. As Helen Pluckrose and James Lindsay detail in their indispensable new book, “Cynical Theories: How Activist Scholarship Made Everything about Race, Gender and Identity,” this radical movement has been percolating for decades, metastasizing from academia to the broader corridors of power. Critical race theory, queer theory and related social justice ideologies fueling Black Lives Matter, the New York Times’ 1619 Project, anti-whiteness programs in the workplace and the broader Great Awokening comprise a puritanical worldview that is being embraced by the nation’s elites. This secular Calvinism, denouncing capitalism’s winners in the hands of an angry mob, is not going away.

The issue is not just whether that morally absolutist world view represents a rejection or a fulfillment of our nation’s Enlightenment ideals. It is the unwillingness of the illiberal left to engage in meaningful debate, its impulse to censor rather than solicit opposing views.

Almost all of the pushback, however, is coming from conservatives, whom the left has vilified and liberals have largely tuned out. The right does not have the power to curb these forces on its own.

Moderates must rise up and say enough – not to the social justice goals they may support, but to the intolerance that forces many of them to live in fear of what they say and do, and increasingly what they don’t say and don’t do. Moderates must advance a liberal progressivism rooted in tolerance that advances their views while vigorously opposing enemies of free speech.

That is easier said than done, as Northwestern professor Gary Saul Morson demonstrates in his recent essay, “Suicide of the Liberals.” His topic is not modern America but pre-Revolutionary Russia, but the parallels are eerie. Then, like now, he writes many “liberals recognized their differences from the radicals,” including Lenin and his murderous henchmen. The alternative, however, seemed even worse. “Socialized to regard anything conservative as reprehensible – and still worse, as a social faux pas – they contrived ways to justify radical intolerance and violence as forced, understandable, and noble.”

Historical analogies are inherently imprecise and often tendentious. But one does not have to believe America is on the path to Bolshevism to grasp the gravity and relevance of Morson’s concluding paragraph:

One sometimes hears that “the pendulum is bound to swing back.” But how does one know there is a pendulum at all, rather than—let us say—a snowball accelerating downhill? It is unwise to comfort oneself with metaphors. When a party is willing to push its power as far as it can go, it will keep going until it meets sufficient opposition. In the French Revolution, terror was eventually stopped by “Thermidor,” and then by Napoleon. But in Russia, Stalin proclaimed “the intensification of the class struggle” after the Revolution, entailing an unending series of arrests, executions, and sentences to the Gulag. What meets no resistance does not stop.