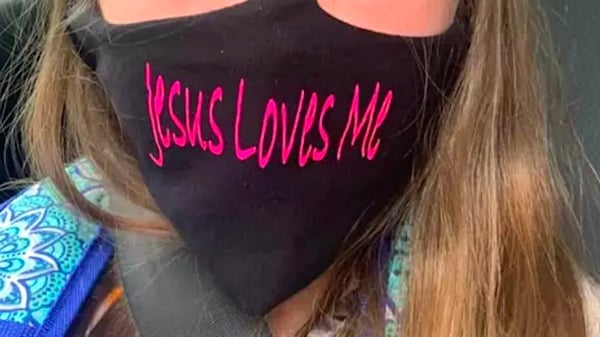 A Mississippi student is suing a school district for censoring a "Jesus Loves Me" facemask, retroactively classifying it among items deemed "offensive" and "disruptive" in classrooms.

The student, Lydia Booth, and her parents, Matthew and Jennifer Booth, named the Simpson County School District, its board of education and a number of school district officials in the federal suit filed in the Southern District of Mississippi.

The third-grader wanted to share her Christian views with her schoolmates at Simpson Central School in Pinola, Mississippi. However, the principal demanded she remove the mask because of the message, even though she wore it without disruption or incident on Oct. 13

Two days later, the school created a policy "that prohibits messages on masks that are 'political, religious, sexual or inappropriate symbols, gestures or statements that may be offensive, disruptive or deemed distractive to the school environment.'"

Lawyer Michael Ross is working on the case under the auspices of the Alliance Defending Freedom.

"Public schools have a duty to respect the free expression of students that the First Amendment guarantees to them," he said. "While school administrators face challenges in helping students navigate school life during a pandemic, those officials simply can’t suspend the First Amendment or arbitrarily pick and choose the messages that students can or can’t express."

He pointed out that other students within the school district have worn masks with the logos of local sports teams and the words "Black Lives Matter."

Should face masks with Jesus messages be permitted in government schools?
98% (165 Votes)
2% (3 Votes)

"This student deserves an equal opportunity to peacefully express her beliefs," Ross said.

According to the complaint, Jennifer Booth discussed the issue with the school, pointing out that the school handbook has no policy limiting her daughter's religious expression.

In fact, the handbook purports to protect speech "under adopted policies that are consistent with the Mississippi Student Religious Freedom Act and the First Amendment," the complaint argues.

"No public school student should be singled out for peacefully sharing her religious beliefs with fellow students," said Tyson Langhofer, director of the ADF Center for Academic Freedom.

The complaint explains that under school "policies and practice," officials allow students "to convey a multitude of messages concerning virtually unlimited topics on their masks at SCS. L.B. has observed many of her schoolmates wearing masks with messages on them."

The ban, the complaint contends, violates the First and Fourteenth Amendments to the Constitution.

When the school resumed classes following the COVID-19 closure, it required students to wear masks. Officials later altered the policy.

"Under the Religious Speech Policy, school officials can censor expression that they deem 'offensive,' even if this expression is not materially and substantially disruptive," the complaint states.

"Students do not shed their constitutional rights at the schoolhouse gate," the filing argues, contending the censorship is causing "irreparable harm."