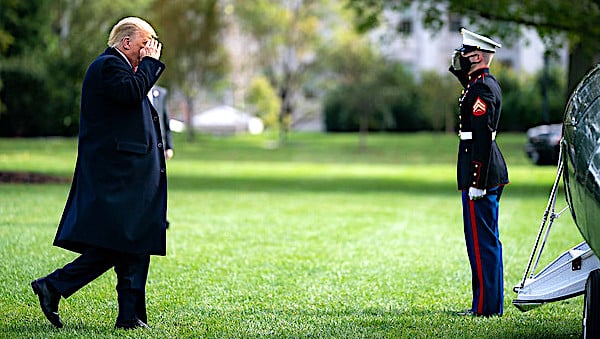 Andrew Weissmann, a top prosecutor on the special counsel’s investigation, suggested on Monday that President Donald Trump fired his secretary of defense in order to pull off a military coup and remain in office.

Earlier on Monday, Trump fired Mark Esper as Pentagon chief, replacing him with Christopher Miller, the director of the National Counterterrorism Center (NCTC).

Weissmann asserted on Twitter that Trump had installed a “flunky” that might allow him to remain in power despite losing the 2020 election to Joe Biden.

The Senate confirmed Miller, a former Army Green Beret, as director of NCTC in August.

The Associated Press and other news outlets projected on Saturday that Biden will win the electoral college vote over Trump.

Trump’s lawyers have filed lawsuits seeking recounts in several swing states. Trump has not conceded to Biden pending the outcome of the lawsuits.

Weissmann said that Trump’s firing of Esper was “serious,” though he offered no evidence that president is setting the stage for a military coup to remain in office.

“To have a successful coup, a leader must control the military,” wrote Weissmann, who is now an analyst at MSNBC.

1. To have a successful coup, a leader must control the military.
2. Trump just fired DOD Secretary and installed a flunky.
3. This is serious.
4. Will Republicans speak up, or will they remain complicit?

Weissmann also suggested without evidence that Trump is holding onto power because he fears federal prosecution once he leaves office.

“For those chalking up Trump’s denial that he lost the election to pathology and being a sore loser, remember also that Trump will no longer enjoy immunity from federal prosecution on January 20, 2021,” Weissmann wrote earlier on Monday.

According to the report from the investigation, prosecutors were unable to establish that the Trump campaign conspired with Russia.