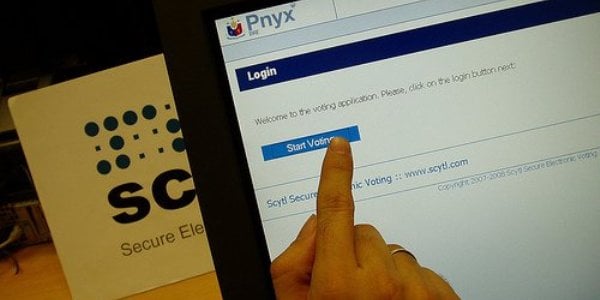 Many states have contracted with a company based in Spain to provide services in the 2020 presidential election, including online voting, according to the head of a vote-integrity group.

Catherine Engelbrecht, founder of True the Vote, said in interview with SiriusXM's Breitbart News Daily show that the Spanish company, Scytl, has cloud-based servers in Barcelona.

"It's true that the tabulation (of votes) occurs in that way in many states that use that system," she said.

Forbes previously reported the company's technology was used in 12 statewide elections and another 980 jurisdictions in 28 states.

Frank Gaffney of the Center for Security Policy noted in a previous Breitbart News Daily episode that U.S. votes are counted in Spain.

"I am personally convinced that the amount of fraud is vastly greater than anything we’ve seen so far, because ... we’ve seen signs of it in at least one county in Michigan, and that is the fact that we have 28 states — including 10 of the swing states — that have had their vote counts tabulated in Barcelona, Spain, on servers and computer systems," he said.

The company boasted of having more than 70 million voters from more than 900 U.S. counties "leverage" its tech during the 2018 election.

Should states have contracted with a company based in Spain to provide online voting services?
2% (6 Votes)
98% (258 Votes)

"Despite media outlets having called the elections in Michigan, the fact remains that the ballot counting process was rife with credible complaints of maleficence, mismanagement and potentially illegal action," Engelbrecht said.

"True the Vote is an organization committed to election integrity, to ensuring that every single legal vote cast is counted, and that illegal votes are not counted," she said. "Given the widespread problems with mail-in ballots and legitimate complaints throughout the ballot-counting process, we believe it is critical to ensure that before the Michigan elections are certified on December 8, all due diligence is carried out to nullify any illegal votes and guarantee that every legal ballot submitted on or before Election Day is counted."

"Despite reports that Vice President Joe Biden has already 'won' the election, there is credible evidence of widespread malfeasance in Michigan and elsewhere that could have led to a substantial number of illegal votes," said True the Vote legal counsel James Bopp Jr.

"Every vote in the impacted states should be verified to ensure that Americans get the president they actually chose," he said. "Regardless of the outcome, the results of the 2020 election should not be decided until known irregularities have been fully addressed. True the Vote’s investigation will shed needed light on active threats to the integrity of our elections."